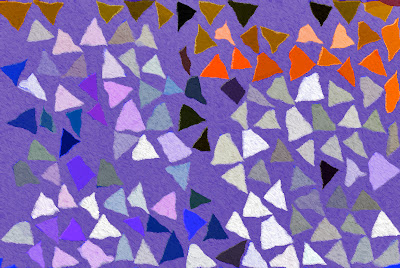 I've said it dozens of times, and I still believe it is true: Blogging is NOT writing.

Maybe I spend too much time even thinking about book bloggers and what they write about. I'll admit that if I had to quantify the amount of time spent doing that, I probably think of lots of other things more often -- like what I'm going to have for dinner or colorful talking ponies.

Which reminds me. I had a dream about a hearse last night. I've never dreamed about a hearse before. It was white. I was following it in my dream, and the passenger door was open. The dream even gets creepier, about who and what was inside the hearse, but I'm not going to say it. I just mention this because of my preoccupation with superstition, and I figure if I die today or something, people will think I'm really cool.

But I'd be bummed because I'm going to see the Decemberists in concert tomorrow.

I thought about posting this because there's been a pretty intense and dramatic blog-o-battle going on this week, and I've been voyeuristically enjoying it.

I suppose it's a self-evident truth that anyone can have a blog.

So I always consider the source whenever I read a blog.

Some blogs are very good. They have voice and attitude and are obviously not the parroted blather that comes from the mouths of the blogger's network of friends.

I immediately write a blog off entirely if the person behind it can't spell and misuses apostrophes... or especially if they can't articulate the correct use of their, they're, and there; its and it's or your and you're. Which means I discount about 75% of all blogs as being vapid, meaningless, and... well, stupid.

A blogger has one chance and one chance only on the above list of words. That's it.

I try not to ever listen to stupid people, and if you're going to try and sell yourself as having a qualified opinion about books and writing, which, after all, are inextricably embedded in the English language, then get your tools right.

So the blogs I enjoy reading... they have something to say and they articulate their message well. They aren't merely friend-networks of like-minded shut-ins (hyphenation-gasm), which, unfortunately, too many blogs happen to be.

But then again, too many blogs are overly-adorned with colorful ponies or give book ratings based on pictures of one-through-five quantities of leprechauns and stuff like that.

If you want me to read you, and, more importantly, believe that you have something to say, then say something with your own voice and own it.

Is that a mean thing for me to say?

Even considering the weird dream about the hearse in the road.

Maybe I should put pictures of ponies on my blog.