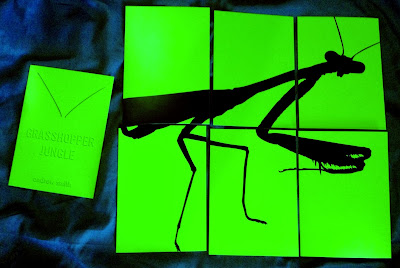 If you are a bookseller or book reviewer in the UK, you may have received these strange postcards with even stranger excerpts of prose printed on their reverse sides. The postcards make a puzzle, and that's it in the photo.

They were sent out by the people at Egmont UK, whose imprint, Electric Monkey, is publishing Grasshopper Jungle in February.

They sent these to me last week while I was away in New York and New Jersey.

Oh, by the way--yes, it has been more than one month since I posted a blog.

So here's some stuff:

1. New Jersey: I visited Montclair Kimberley Academy and spoke to the entire high school student body. It is easily the nicest high school I have ever seen in my life, and I've been in a heck of a lot of high schools. Their auditorium has a balcony. That's not what makes the school so nice, though. The kids wear ties. And they read like fiends.

Here I am talking to the kids about Winger: 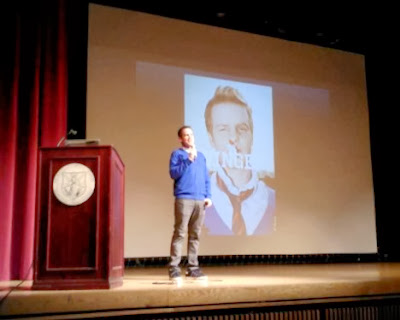 And here I am standing in front of a greatly diminished stack of my books. I think just about everyone at the school bought a copy. 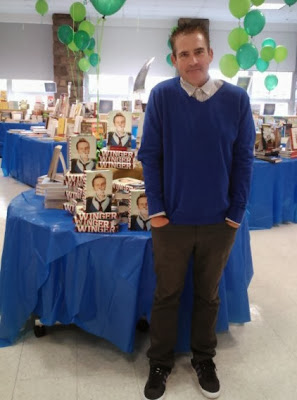 I felt awkward because I was the ONLY GUY not wearing a tie. So the MKA people gave me one of their school ties, which is, like the coolest gift ever.

So I have to again say a huge thank you to Montclair Kimberley Academy, Scholastic Book Fairs (especially the lovely Carol Levine), and Simon & Schuster (especially Venessa Carson and David Gale), and Shanta Newlin and Julie Strauss-Gabel from Penguin for making this trip so amazing.

2. While I was in New York City: Lots of stuff happened. Notably, more recognition for Winger.

The book made two very distinguished Best of 2013 lists last week. So, besides the stars from Kirkus, Publishers Weekly, Booklist, and Shelf Awareness, Winger has found its way onto these:


That's quite a CV for Ryan Dean West.

3. There was Lots More: But I'll tell you about it later.

In less than a month, I promise.