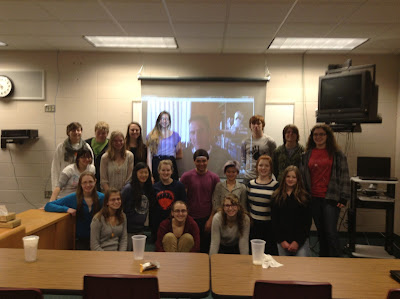 I know what you're thinking.

You're thinking, when is he going to get on to Part Seven of How to Write Novels?

Well, it's coming soon. It's the swashbuckling installment of my online course. Hopefully, you've been keeping up and have accumulated all the necessary accoutrement detailed in lessons one thru six.

This morning, immersed as I am in a deadline hell rivaling Marbury in degree of magnitude (and why can I not stop myself from going back?), I popped over to Mount Horeb High School, which is coincidentally located in Mount Horeb Wisconsin, for a visit with some amazingly bright kids.

By the way, I had meant to ask them if there was actually a Mount in Mount Horeb. I tried to look it up online, but got tired after a while.

Anyway, I visited the school via Skype.

Don't laugh--it was the first time I had ever Skyped with anyone in my life.

I lost my Skype virginity at  Mount Horeb High School.

Anyway, it was a lot of fun. I made sure to be wearing pants in case I had to stand up during the session, too; and I removed all the incriminating evidence that would naturally have been on display in the background of my office.

All the kids at Mount Horeb High School had been reading The Marbury Lens, Stick, and In the Path of Falling Objects. They asked great questions about writing, how I do what I do, and specific things about my books.

Mount Horeb High School: Thanks for having me out.

Now if you'll excuse me, I have to get back to hell, which is located inside my office here in Southern California.

So I asked Andrew Karre, editorial director at Carolrhoda Lab, if I could participate in today's cover reveal for Carrie Mesrobian's debut Sex & Violence, and he graciously sent me the images I'm posting today. 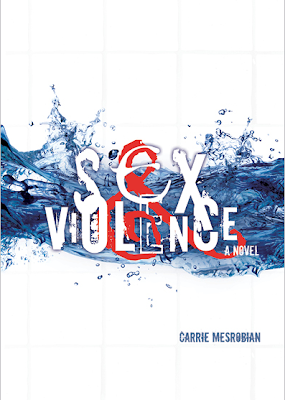 You should check out what Andrew has to say on the Carolrhoda Blog (but not until you finish reading this one).

So, I have a kind of long story as to why I am blogging about this book.

A few months ago, I was talking to my agent Michael Bourret, and he mentioned that Andrew Karre had a manuscript from a writer named Carrie Mesrobian, and he thought I should read it.

So, I thought, cool.

I've known Andrew for a while now, have spoken with him over the phone on several occasions.

Andrew happens to be on my bucket list of editors--editors whom I'd want to work with no matter what. I happen to be very fortunate to have worked with a most enviable collection of editors, people I think are the very best in the business and occupy the top spots on that list: Liz Szabla, who edited my first five books and taught me so much about writing, David Gale, amazingly talented, hard-working and professional, who edited Winger (coming May 14), and the great Julie Strauss-Gabel whom I most likely drove absolutely crazy with Grasshopper Jungle.

Well, I finally got to work with Andrew Karre. I wrote a short story for an anthology he'll be publishing this fall (I'll tell you the details when I'm permitted, but there are some incredibly huge authors in this book. There are some slender ones, too).

I have one or two remaining bucket list editors, but I wouldn't want to scare them off.

I told you this would be a long story.

Okay. So my name came up about a month ago in a comment on a Facebook thread about sex in YA (imagine that!), and in this comment Andrew said something about a particular sex scene he really liked in Grasshopper Jungle (yeah... okay... so there is sex in that book, although most of it occurs between bugs). In the thread was a mention of a book by Carrie Mesrobian called Sex & Violence.

That was the book my agent told me to read.

So I contacted Carrie, and I said something like, maybe I can get Andrew to send me an ARC.

Within moments, I got a message from Andrew telling me to check my email; that ARCs of Carrie's book were not out yet.

And there it was: an electronic copy of Sex & Violence which I immediately installed on my iPad.

I think I read about 30 pages that first day. Then I sent Carrie an email in which I said something like holy shit, this book is so good I am going to make myself read it slowly--I don't want to get to the end.

So let me tell you about Sex & Violence.

This is not your raven-haired mopey girl in a big dress YA.

It is not your entwined-couple-shrouded-in-mist-who-you-KNOW-are-never-going-to-bone-because-one-of-them-isn't-even-a-fucking-human-being YA, either.

This is something you have never seen before.

I love this book. I was not asked to blurb it, but I had to. Unsolicited. It is one of the best books I've read in a long time.

I love the cover. Like a lake turning over, it's about what lies beneath the surface. This is what the book is about, and I found myself constantly (even to this day) wondering what's going on inside this guy? (The main character is a guy named Evan Carter; and let me say this, too: Carrie writes "guy" better than most guys I know.)

Really. This book is layered, disturbing, and completely engrossing at the same time. It's an example of some of the finest character-driven fiction I've seen in recent years, and I promise you will not be able to stop thinking about Sex & Violence for a long time after you finish reading it.

So I'm happy to be part of Carrie's cover reveal day. And I'm happy I got to be one of the first people to read this powerful book.

Sex & Violence is coming from Carolrhoda Lab on October 1, 2013.

By the way, there is only ONE editor on my Copy Editor Bucket list. And she lives in Hell's Kitchen. 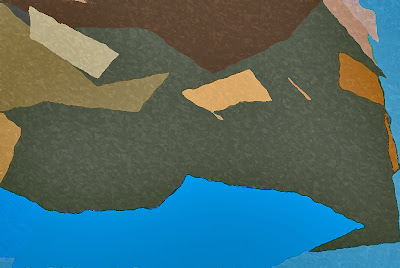 Part seven will be along in due time, but in an effort to stress my writerly obligation to consistently strive to be all things douchetastic, I just want to say I am very excited about tomorrow's blog post. how to write novels (part six)

Our attendee in Pennsylvania writes:

I'd like to know if there are rules for how I'm supposed to dress in order to be a successful novelist.

Finally, someone asks an appropriate question.

Proves my work is paying off. And I think before I address today's question, I should refresh your progress with our critical checklist thus far:

☑ A Drowning Victim outfit for our dress-up day

☑ A name for your house

And if you've completed all the above, then you are ready for today's lesson, which is this:

RULE NUMBER SIX: Prepare yourself for the author's lifestyle by having a keenly developed sense of fashion as well as a versatile wardrobe.

Here's the deal: We writers need to present a complete package-- a cornucopia of douchery. Picking the right outfit is the icing on your gravycake of twathood.

1. What I wear to lunch with an editor: 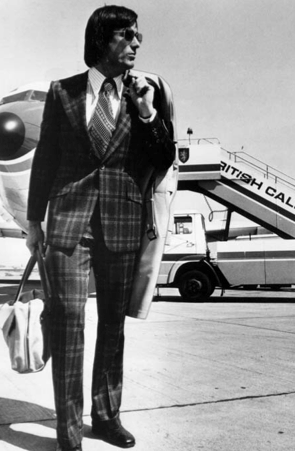 Here I am, sporting my Anton Chigurh look, on my way to lunch with my favorite copy editor--you know, the person who makes me look smarter than I am and fixes all the shit I fuck up on--and believe me, that's a lot of shit!


I must have died and gone to Chicago, because I'm staring at the Manual of Style!

[Side note: If you laughed at that joke, I'd be entirely willing to make out with you]

Why do I lie awake at night thinking about shit like this?

Oh yeah, what to wear at awards presentations...

2. Me, dancing with J.K. Rowling at last year's Printz reception (I'm the one with the tie): 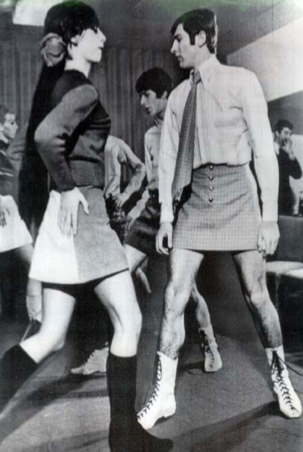 Who said boys can't be writers?

Yeah. That's how I roll.

Nothing says douchenozzle as eloquently as a pair of white boxing boots beneath matching miniskirt and tie tailored out of vinyl-backed blackout curtains from a Comfort Inn. This get-up also allowed me to keep my partymates spellbound with my watch-me-crush-a-Bud-lite-can-between-my-thighs act.

Who knew I should cross my legs when I sat down? 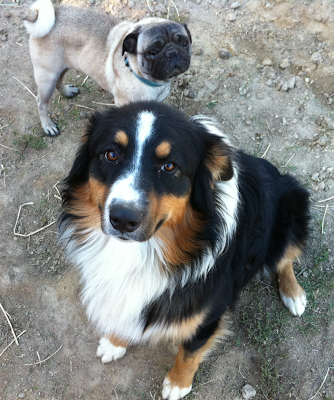 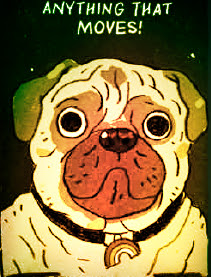 how to write novels (part five)

A conference attendee in Pennsylvania writes:

How many books should I be prepared to write per year in order to be a successful novelist?

Whoa there, hotshot. I think you're forgetting something:

And (squee) we've introduced something new, too: 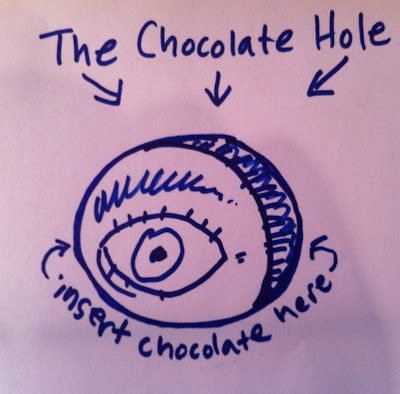 I know. I happen to be one of those writers who surrounds himself with some pretty big chocolate holes.

But getting back to PA's question:

You have everything out of order.

How can I teach you if you put everything out of order?

You are not ready to start writing until you name your house.

RULE NUMBER FIVE: (I think we're on rule number five) You must give your house a name.

Here's the deal: I will help you name your house. I will give you a name for FREE.

Writers simply must name their homes. It's our way of letting everyone else know how douchey we are.

Now, a simple name like Seacliff Manor is pretty damned douchey, especially if you live in Iowa.

But it's not good enough.

The name I am about to give you doesn't just sing--it's a Wagnerian opera pealing to the heavens the magnitude of your incontrovertible twathood.

Here is the name:

It's what I call my house, especially when I want my still-posting-a-Ron-Paul-yard-sign-biker-neighbors to beat the holy shit out of me.

Now, after you've named your house, you must also build a trophy case for all the writing awards you're going to win.

Then, you invite your friends over so they can gaze at your writing trophy case at Scrivener's Mews.

Look, here's the deal: Invariably when I write shit like this, I get these bent-out-of-shape emails from people who actually live in douchebag-o-miniums named Scrivener's Mews.

Well, what do you expect?

If you don't want people to think you're a douche, I would suggest you change your house's name to something like this:

Have you given me chocolate yet?
Posted by Andrew Smith at 7:37 AM