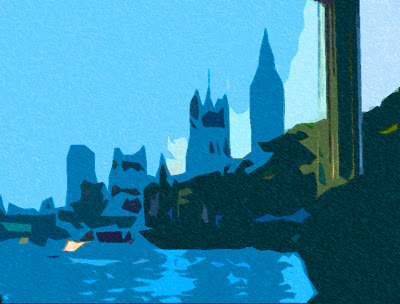 When I was a very lost and confused teenager, I read a small book called This is It by a British philosopher named Alan Watts (I still have that book today, as a matter of fact).

It's something that Jack, from The Marbury Lens -- and I -- say to ourselves quite a lot.

Watts' book is essentially about perception and reality, the intertwined concepts that torment Jack (and a lot of readers) so much in The Marbury Lens.

When Jack begins popping back and forth between here and Marbury, he questions his sanity and wonders what is real. To him, the feeling of his feet inside his sneakers as he walks along a street in London is just as real as the arrow that injures him in Marbury, and he can't figure out how his perceptions and reality end up balancing out.

Here's a cool quote from Watts:

No one is more dangerously insane than one who is sane all the time; he is like a steel bridge without flexibility, and the order of his life is rigid and brittle.

No doubt, the characters in The Marbury Lens go through their personal episodes of... um... inflexibility, and this becomes really the essence of the novel's most grating torment: like Jack himself, readers have to figure out for themselves whether or not what's happening to him is REAL, or if it is all a manifestation of the post-traumatic stress he experiences as a result of what a sexual predator has put him through.

It's a tough thing.

I could make some Venn diagrams about the hundreds of email messages and other comments I've received in the 10 weeks since the book has come out, but I'll save that for another time.

First, there are the readers who figure out an answer to the reality/perception issue (and the answers split among members of this group), and then there are the readers -- frustrated ones -- who send me messages begging for an explanation: is it real, or what??? The ones who need a concrete answer.

Well, ever since I was a teenager, like Jack, and before I got all into my Huxley-slash-Alan-Watts phase, I wanted to know the answer to that, too.

This is getting long. I'll continue with readers' perceptions and book reality tomorrow. And I do want to eventually include a little description of the physics that construct Jack's universe.

At least, in my perception.