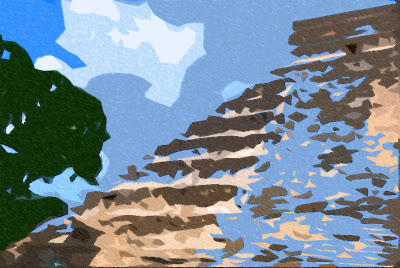 I know I skipped his second, but Jack states his Third Law of Marbury as this:

When there’s nothing we can do to make things better, at least Conner and I can stop letting them get worse.

At the very end of yesterday's post, I pointed out that in The Marbury Lens, Jack uses the lens to "tune in" to another channel, because it acts as a kind of remote control, however unreliable it is for Jack's purposes. His compulsion to return over and over is equally due to his desire to "fix" things in his power (like helping Ben and Griffin in Marbury) and to escape things (like his guilt, paranoia, anger, sexual confusion -- here) that are outside his control.

The idea of escaping those psychological monsters beyond his control, in favor of a place where he feels more powerful (even if it is worse than hell, with real monsters) is also an element of The Marbury Lens that many people have interpreted in different ways, and wanted to talk about.

A lot of readers see this compulsion as an allegory for addiction. The addict escapes the unbearable reality of life and enters a more controllable state, even if he is aware of the self-destructive consequences involved. So, like I've mentioned receiving letters and comments from boys and young men who were victims of abuse, I have also received a number from young men who've lived through addiction and have also felt a kind of connection to Jack and The Marbury Lens, as though it told a story that was a significant part of their own experience.

I'm not going to talk about my actual intent with that control/lack of power/addiction relationship -- whether I purposefully made this implication or not. I think it speaks for itself, and readers can make up their own minds about it. But, nice call, those of you who have sent me letters and email messages about Marbury and addiction, and how reading the book struck a resonant chord with you.

Eventually, I'll hit up Jack's Third Law of Marbury, and I plan to include some other thoughts on the book, and on males and male-related issues in Young Adult literature.