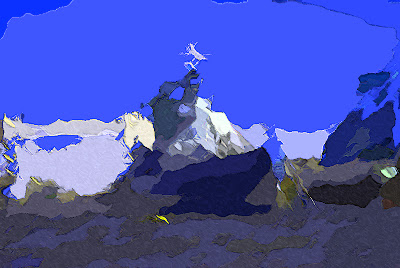 I realized quite a while ago that writing is not an effective way to exorcise your inner demons.

It's pretty good at feeding them, though.

There have been things that I've felt the need to say about The Marbury Lens for a very long time, now, but I shut up for a bunch of stupid reasons... like because I'm a fucking idiot.

There. I called myself out first. Now I'm going to call out some other people.

Yesterday, Liz (I don't know if that was my Liz) made a comment on one of the "bad words" blog posts that made me think for a long time. Yeah... it was one of those don't-get-any-sleep think sessions.

I don't know how I feel about either one of those GPS locations.

Look. Here's the thing. I'm not going to skirt around this issue any longer, and I'll begin -- not only by calling myself an idiot (see above)-- by saying there are lots of things I will never fully understand.

If that makes me a sexist or some morally corrupt person, some insensitive and ethically bereft hermit, then I am all those things too. I have a wife and two teenage children (a girl and a boy); all of whom I love very much. I can be compassionate and understanding, and try to be as educated as possible about my daughter and the kinds of things she goes through in life.

I can come close to being there in every way for my wife and daughter. But I'm a man. I can never know exactly what it's like to be a girl. I would never be able to write about what a girl goes through when she's having her period.

I mean, really, what guy actually understands that stuff?

This brings me to the subject of today's title: The Marbury Boys.

You might guess what that's going to be about.

It's about the dozens of boys and men from all over the country (and even out of the country) who've written to or contacted me in the past 2 months since The Marbury Lens has been released.

And, guess what they want to talk about?

Not Conner's sexual curiosity or tactlessness in communicating with his best friend.

None of that matters to The Marbury Boys.

They want to talk about something else.

And this was something that I never thought about for one second when I was writing the book... but then, all of a sudden, they started talking to me.

And I'm trying to figure out how to write about this without feeding some more demons.