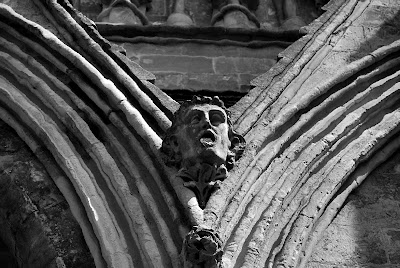 We could never have trash piling up here where I live.

Because we have marauding herds of coyotes and raccoons here.

They should let a big herd of coyotes go free in New York City. Mayor Bloomberg, you heard it here first. That would be cool.

With thousands of bloodthirsty coyotes.

That would be better than anything.

But here, we don't need no snowplows. Our snowplow, up here in the mountains, is called "springtime."

I'd like to let a walrus go in my lake. That would freak the shit out of people.

Next month -- February is next month already -- I am going to be *speaking* at the Southern California Independent Booksellers Association Annual Children's Books and Literacy Dinner.

Or, maybe, I'll speak about the words that should be banned -- like "fajita," "squee" and "dystopian." That spurred a lively response on the blog last week.

In any event, you may have to be there to find out...

Oh yeah, I have these really cool The Marbury Lens nesting dolls with scary shit on them (you'd have to read the book to get it). I may bring one there, too. I'm going to put some pictures up. Eventually.

I may put one up for swaps on Ebay (which I have never used in my life), as long as I can find someone who has a walrus they'd like to get rid of.