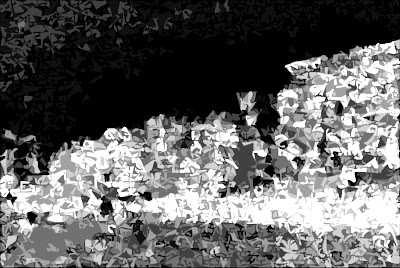 So I know that nobody is going to read my blog this weekend, since everyone is partying down in San Diego, a city that has permanently banished me, so I figure I have two days of unrestrained honesty where I can liberally name names and tell precisely the truth about everything that pisses me off, instead of holding it in and giving myself chronic and unrelenting cheerlessness.

So, I'm going to do this guest-blog interview coming up this week. I'll post the link when it comes around. But the interviewer on the blog asked a question that -- to be honest -- I've been asked many times before, but, for whatever reasons, this time it really made me think about things.

[Side Note: I often think about this -- how my answers to the same questions change from interview to interview. And I don't mean questions like "what was your high school mascot?" but other, open-ended questions. They have to change, don't they? In fact, I would think that any writer who continually spouts off the same canned response to these open questions probably ran out of stuff to think about and say before his book was on the page.]

Okay. So, here's the question (and don't worry, Blogger XX, I am not going to "scoop" you by putting my entire set of answers here; just this one):

I was asked, in my books, who's my favorite character, and why.

This is a tough question because I am all of my (main) characters, so elevating one to favored status seems kind of self-absorbed and ignorant to other components of who I really am. The truth is that all my main characters are totally different parts of me.

Now that I say it, I realize how self-absorbed it really sounds. Oh well. I guess I can’t “be” anyone else.

I think I identify most closely with Jack Whitmore, the narrator of The Marbury Lens, but, as a reader would know, he’s a pretty messed-up guy. Well, actually, he’s incredibly messed-up. Still, what Jack goes through in the novel is very much what I went through, and felt like, when I was a teenager.

Not a pretty thing.

Jack rants about that ugliness, in fact – how much being a teenager sucks.

On the other hand, I really admire Stark McClellan, the main character in my next novel, Stick, because he has this genuinely accepting quality about him – not just toward the things going on around him, but to the individual differences that sometimes isolate people from one another and shuts them up in small cages of fear and mistrust. I think there’s part of me that can see through the fearful us-and-them kind of trap that a lot of people fall into, and Stark, who is actually a pretty heroic kid, is damned good at seeing through the bars on the cages.