just keep telling yourself it's real 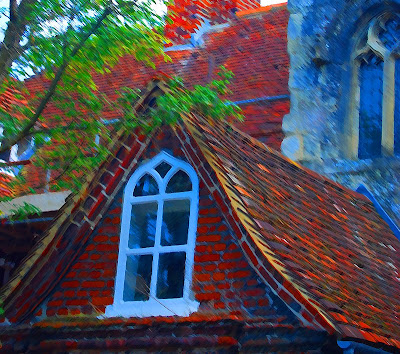 I realized today, after two more Drew, this book scared the shit out of me comments from (sorry, Kel) women, that I really do enjoy creeping people out.

That, and there was the life-size Barbie doll climbing up the stairway with a knife in her hand to greet my wife incident that one morning when she woke up (it's been a really quiet household since then... wondering when the hell she's ever going to get over it and just learn to forgive).

And then I thought, crap, if in the path of falling objects scares you, then the book I'm working on right now will deeply disturb you.

I realized something else about how I write, and it pertains to something I wrote down in a journal when I was a kid... traveling around Europe by train by myself one year. I used to do that a lot, but it wasn't such a big deal for me because I had all kinds of family and friends over there with places to stay... England, Germany, Italy, Sweden, and France, among other home bases.

But I wrote that I preferred moving on a train to stopping, because when the train would stop and I'd have to get out, there would always be unexpected things I'd have to deal with... arrangements to be made.

My writing process is kind of like that, too. Things move along and everything is steady and predictable. But when a major turn happens, it's kind of like everybody getting off the train all at once, and all of these new weird things start happening.

That's where I am right now. Major shit happening. Again.

And what I'm writing is kind of a fantasy, but I really do not like fantasy, so it's also not a fantasy at the same time... which is why I have to keep telling myself it's real, which, in turn, creeps me out even more.

Because it really is creepy.

But there's no magic, wizards, dragons, elves, vampires, or any goddamned character or place with a name you can only pronounce if you speak Icelandic.

Which is why it's real. But a fantasy. And really, really creepy.
Posted by Andrew Smith at 3:23 AM