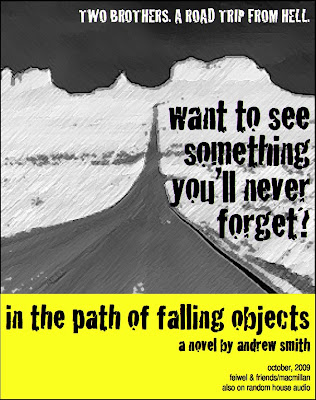 I have to have "the talk" with my son.

Yeah... I know, he's fourteen. But next year, in his Advance Placement English class, they're going to make him read Kate Chopin's The Awakening.

So... to prepare him for the castrating effects of state-run literacy programs, I've decided to get him some summer reading for his edification. I'm stocking up on the following, which he has not read yet, and I'm sure he'll love:

Under the Volcano -- Malcolm Lowry

Those should keep his manhood fairly well protected.

I love those books, though.

Speaking of which, my pregnant friend Sarah -- who doesn't read this blog, otherwise she would have had some choice zingers for me yesterday -- sent an email to me and two of my friends, John and Casey, in which she gave my first unsolicited review of in the path of falling objects:

(That bastard Smith) hit the money with this book. I know you're jealous that he's letting me read it first. (Prick), I know you tried to cover it up by implying that my being pregnant had something to do with it. Don't really get it, though. Implying that I'm hormonal? I'm sure that wasn't your intent.

Regardless....I am FEELING this book. I actually don't like it when books are made into movies, but this is a movie-friendly book for sure. I totally dig the characters and the narrative style. I'm almost halfway done, so I'm really hoping the ending doesn't piss me off.

Oh yeah... I'd NEVER write a book with an ending that would piss you off.

Glad you like it, Sarah.
Posted by Andrew Smith at 3:42 AM