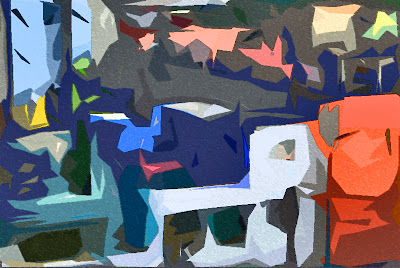 I wrote a book.

It has a lot of Ernest Hemingway references in it.

When I was in college, learning how to write, I thought there would never be anyone who could write like Hemingway, and for a very long time I refused to read anything that post-dated him.

I got over it when I grew up. But I still love his writing.

Like a lot of writers, I keep re-thinking his quote, The first draft of anything is shit.

And I wish I lived in the day when drafts were actually done his way, when people wrote letters, and phones were attached to your wall and not your skull, or you had to find a gas station and pump dimes into them.

I mean, I can see what Hemingway is saying, but I don't even have first drafts. Technology means you don't have to sit down and write everything out (on paper) and then come back to it, clean it, gut it like a fish, and do it all over again.

So I can stay on a schedule and predict with reasonable accuracy when I'll actually be finished writing a book. And when I finish, I finish. Because, as I write, I find myself rewriting, frequently chopping up, every single sentence at least a hundred times or more.

And then doing it again.

So my first drafts end up being my final drafts, which are, on the average, my thirtieth drafts.

Technology has changed what we write and how we write it.

The bad side of it is that with the interconnectedness of readers and writers, publishers, marketers, booksellers and so on -- there is a heavy force that herds writers like cattle toward the abattoirs of markets and content; our human stories and real experiences, trend like celebrity faux pas on Twitter.

Just look back at some of the fiction bestseller lists in America, pre-bastardization of culture via technology, and compare the breadth of their content to recent years.

As douchey as it is to paraphrase McLuhan, in writing, the medium is definitely casting a massive shadow over the message.

Yesterday, a friend (Sarah) wondered about the inclusion of a prologue in a manuscript -- if doing such a thing would be perceived negatively. It's a topic that comes up frequently with writers (when I talk to any of them).

When I wrote my first book (way back in 2008), Ghost Medicine, I included a prologue on the novel. I even called it Prologue (I know... the horror). But I was very "disconnected" at the time, so I didn't know that you weren't supposed to do such things; that readers sometimes assume that prologue equals self-absorbed essay by boring scholar about the author or something like that.

But nobody ever questioned my inclusion of an actual, named, prologue in that novel. And I like prologues anyway. My next three novels, In the Path of Falling Objects, The Marbury Lens, and Stick all have prologues to them.

I just don't call them "prologue" and they happen to be very short and punchy.

And the novel that I wrote with the heavy Hemingway/American Literature references also has a prologue, too -- with a title (but it's not called "prologue").

My way of fooling the prologue-bashers out there.

But, go figure, the novel that I am finishing THIS MONTH (I need to keep repeating that to myself so I can feel the pressure), has no prologue. It just goes.

Tomorrow, I'm going to post a list of the blogs that will be participating in the great cover release for Stick this coming Friday, and I'll tell a little bit more about that novel, too.