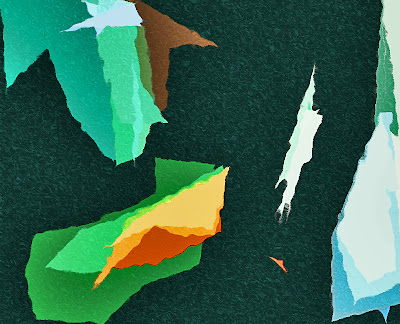 One of the more difficult questions for me to answer is What's your book about?

I see the same problem with nearly all the writers I coach, too. It's because writers have a tendency to envision what they write holistically -- like a 3D map of the universe -- as opposed to succinctly and linearly mapping out how you get from point A (the beginning) to point B (the end).

Young writers -- well, pretty much all "just starting out" writers -- tend to get battered by ideas, so they frequently have a hard time getting them down on paper. Because the big ideas they see are usually the disconnected emotional peaks on the journey between A and B.

If you hadn't noticed, I'm getting all "advicey" on you.

But this is something that we talk about a lot in our Young Writers' Group, and was a topic of discussion last week when a former member visited me when he was on break from college.

This relates to an article about Vonnegut's mapping images that was recently sent to me by a copy editor friend, in which the great novelist graphically illustrated the seismic-type shifting of emotions in story lines.

It's the parts of writing that span the gaps between the extreme peaks of emotion (the parts that I call "connective tissue") that frequently make inexperienced writers give up on building their universe.

It's because those parts of writing are tedious -- the grunt labor that supports the structure with all that delicious curbside appeal. But they have to be there, because not only do they serve as the skeleton to your otherwise quivering ball of slobbery goo, they also give the reader a pause to catch his breath, too.

Some very capable writers will skip those connective tissue parts with the plan to come back and tidy up later. I suppose that strategy is effective for a lot of successful writers. With my kids, though, I tell them to slog through the grunt work, no matter how slow and agonizing it can be, and they will get to that next great peak-moment on their A to B roadmap.

On tomorrow's post, I plan on predicting the future.