and the boy in the crow's nest will cry 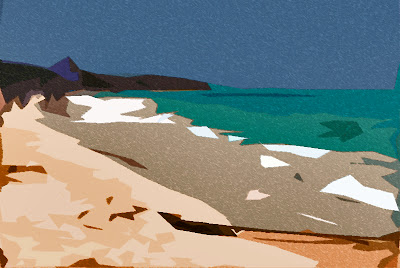 Okay. Well, the big surprise for this week is that the cover for Stick is going to be revealed by the Friday Five -- 5 bloggers whom I've chosen not-so-randomly, just because they cover things in their own ways and they're located all over North America.

So I'm pretty sure the revealing is going to kick in at a fairly early hour, regardless of what time zone you live in.

I'll be blogging from a remote location that weekend, as my son and I take a road trip up to the Bay Area so he can visit his school of choice for next year, UC Berkeley, and hang out in one of the coolest areas on the planet.

Yesterday, I posted a short status update on Facebook, proclaiming my love for Los Angeles (In my reckless and swooning passions, I included the <3 emoticon). I didn't do it to try to sway my son into choosing UCLA over Cal (he got into both), I only did it because I really do love L.A.

That's a hard thing for people to wrap their heads around, I think.

In the same way that the "standardized" mass psyche buys into the concept of bashing certain common targets (I can think of a few celebrities, for example), it seems like it's totally okay -- especially for outsiders -- to bash on and spew hatred for Los Angeles. And, yes, I'm calling you out AGAIN, Colin Meloy, and my offer still stands -- you can review my book, and I will continue to review your music.

After all, parts of Stick do actually take place in Oregon and around Portland.

And I may as well tell you now, Stick is a kind of love-letter for places that I... well... love. Like the Puget Sound and coastal towns in Washington, the small beach communities of Ventura County, California, and, especially, Los Angeles.

No spoilers here, but the ending of the book takes place in downtown Los Angeles. When I was writing the book, I wandered around the streets in L.A. taking notes on what I saw happening around me -- scribbled-out snapshots that bump into Stark McClellan as he's searching for his missing brother, Bosten.

My son, who taunted his friends with the fact that I actually allowed him to read the unbound, typeset pass pages of Stick (and... no, I do not know when the ARCs are coming out), tells me that his favorite part of the book is the part that takes place in Los Angeles.

As dismal and strange as I tried to make L.A. seem in Stick, I guess there's no masking my love for the place.

And, with that, here are the five blogs who will simultaneously be revealing the cover for the novel on this Friday, April 8:

The Naughty Book Kitties
Lady Reader's Bookstuff
I Read Banned Books
A Simple Love of Reading
The Quintessentially Questionable Query Experiment
...By the way, any of you out there who are just starting out, working at the craft of writing, and maybe in the process of looking for a literary agent, I can't recommend Matthew's Query Blog highly enough. Do yourself a favor and check it out.