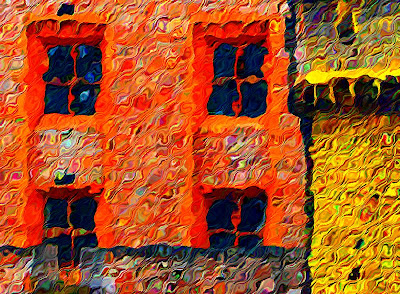 There's something liberating about trash day.

I recently began emptying out my entire house of years of accumulated "stuff." Finally, it's getting empty, but I had to rent a dumpster to do it... and dumpsters are prohibitively expensive up here in the mountains. It's not that I'm a pack rat or anything; it's just hard to get rid of "stuff" where we live. In winter, if the snow is bad, we may not get garbage collection for two or three weeks. So, stuff has a tendency to pile up.

When I cleaned out my office last week, the majority of the "stuff" consisted of tens of thousands of pages of printouts of "stuff" I'd written, and probably an equivalent number of burned CD-Rs with various incarnations of revisions. I guess those things were, at one time, hard to just get rid of, but I feel greatly relieved in having finally done so.

I read an article recently about this group of people who had come together in a movement to "downsize" their lives by limiting the number of material possessions they had to 100 things.

I was intrigued by how light your life must feel when you decide to follow such a path. [By the way, my children are both Buddhist, but I do not believe they could ever comprehend limiting their possessions in such a manner. Eh... maybe I'm wrong.] Anyway, I thought it was an interesting idea, and I talked to my wife about it. But I had some serious questions.

For example, do socks count as one or two things?

I went through an inventory of what I took with me on my recent trip to Chicago... in one suitcase and one backpack... and it came out to over 100 things.

I immediately realized 100 was an impossible constraint on my life's baggage. It would require doing laundry WAYYY to often. And besides, if you started at the very top of your list with things that you absolutely NEED in order to get by: a house, a car, soap, a computer, underwear, running shoes, a cell phone, SOCKS, etc., you will hit the cutoff really fast.

And what about books? We have bookshelves -- full ones -- all over our house. Which ones would I have to throw away?

Apparently, the "Kindle" people must be backing this insidious "Downsize Your Life" movement.

Still, though, I am devising an experiment -- a kind of boot camp -- where I will attempt to live for one entire week and limit my material interactions to 100 "things."