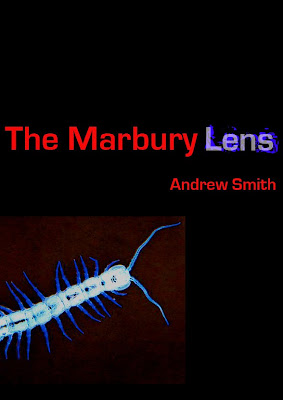 Sometimes, being a writer means you have lots of different work things going on all at once. And sometimes it also means a lengthy stretch of sitting around and waiting for your next assignment.

So I thought that since I have a new book (in the path of falling objects) that will be in the stores in about 7 weeks, and another book (The Marbury Lens) that is scheduled to be out in fall, 2010, that from time to time I would post on my blog about where I am in the process of publication as an author. After all, these are some of the most common questions I get from other writers who are trying to get established.

First of all, the new-look, consolidated website is up and running at www.ghostmedicine.com. The site brings together all my books, appearance dates, teacher resources, and stuff like that. I even put some words on there about The Marbury Lens. But that is not the book's cover up there... we are nowhere near talking about cover art yet -- even if that is pretty slick-looking. Early focus group reports: guys would pick that book up; girls are totally creeped out by the bug.

But that's probably a good thing.

And here's the little blurb from the site about the book:

The Marbury Lens: It’s a place worse than Hell. And Jack keeps going back to it. He can’t help himself. Nobody can.

Jack has his reasons.

He has his doubts, too.


I have a feeling that we're probably going to work through the necessary steps more quickly with this book than my earlier books. I could be wrong, though. Here's where we are: I submitted the manuscript at the beginning of June. My editor liked it (well... actually a bit better than "liked"). We spoke on the telephone about some questions regarding the relationships in the novel. There were only about five or six "big picture questions" that my editor had. (Note to aspiring authors: you should always take notes whenever you're on the phone with an agent or editor, even if -- like me -- you can't read your writing). So, I went back through the entire manuscript and answered those questions here and there, which added about 1,000 words to the novel. This wasn't a problem for my editor, even if the novel is a bit "longish" for YA, at 93,000 words.

Now, having read my revision, my editor says we'll go right into line edits with some marginal comments, which tells me that the work is pretty tight and almost good to go. That's a really fast pace for getting onto the edits, but if we finish everything before the winter holiday break, there will be no problem getting the bound galleys out by spring of 2010. And that's about when they start considering the cover art, too.

As far as in the path of falling objects is concerned, this is the big wait period. Most of the galleys have been given out to the people we want to have them (don't worry, if you put your name on a list at ALA, or gave me your card, those galleys are going in the mail this week). So far, the people that have read it and responded to me about the book... well, let's just say I am totally blown away by their reactions.

So, everything is set and on course for that one. Also, there is a very cool teacher discussion guide for in the path of falling objects available on the website. It's the same one we ran out of at ALA, so you might want to check it out.
Posted by Andrew Smith at 5:54 AM