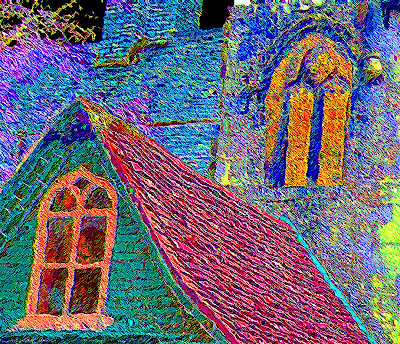 I got up this morning at the usual pre-dawn hour. When my coffee had finished brewing, I went downstairs and poured a cup, then back upstairs to my office.

The sun was just coming up, so I paused a moment and looked out the doors onto the upper balcony, across the paddock to the hills south of us that were just getting hit by the sun. The roosters were crowing, and I stood just about even with a very noisy nest of hawks in a cottonwood about 35 feet up from the ground.

And when I looked across at the hills, I saw two of my horses, Dusty and Arrow, grazing. They had broken out of the paddock enclosure and were probably about a half mile away. I took a couple quick pictures with my iPhone.

At 5:30 in the morning, probably the last thing most people want to do is chase down runaway horses. Especially ones as strong and fast as Dusty and Arrow.

I woke up my daughter (the horses like her more than me -- they probably think I'm a bad dad, too), we grabbed some ropes and a halter, and set off on our expedition.

I thought it would be easy. I had a plan. Reno, our good, mellow horse, was in the barn. I figured if I let him out (because he's the leader horse, even if he is very slow and very old), the other two would come back down to the paddock.

Reno, on the other hand, fully realizing that it was Independence Day for Horses, immediately took off and joined the other two up in the hills. No, he didn't just join them, he led them off... like, in the direction of Mexico, I think.

Oh yeah... and I never even got the first sip of my coffee yet.

So my daughter and I, ropes in hand, followed those horses way back into the hills. I'll be perfectly honest -- and it may be hard for some people to understand -- but it's impossible for me to feel angry at those animals. As frustrating as the situation would appear on the surface, there is something incredibly liberating and uplifting in seeing naked horses (no ropes or halters or anything) just running and kicking in the cool morning under the first rays of the sun.

I know... I'm weird. I kind of wrote about that in Ghost Medicine, but it never gets old.

They knew we were following them, too. It was their way of playing with us. Eventually, they stopped, and Arrow, the big and most powerful one of the three, led them to where my daughter and I stood waiting for them. We got a halter on Reno, and they all three, happy to have proclaimed their independence, willingly walked with my daughter and me back down the hills and to our enclosure.

It was a great morning.

Like I said, they were about a half mile from me when I snapped these pictures, which accounts for the graininess from blowing them up... but here's what it looked like at 5:30 this morning. 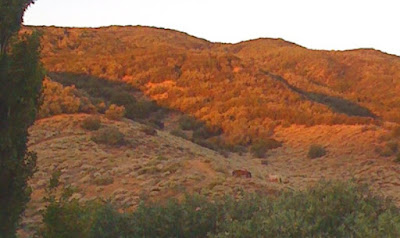