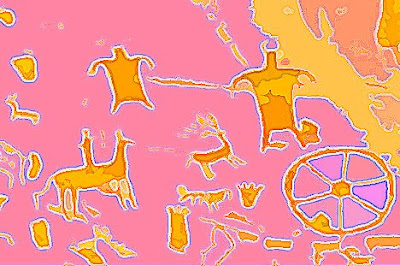 Okay. One thing I never blog about is politics. Every possible perspective is already out there in multiple clones, anyway.

But I've seen a political advertisement running on television for a few days now [Note of clarification: Drew does not watch television at all, unless there's a baseball game on, so you know what I was doing when this particular commercial aired]. In any event, I don't really care about the political ideology the ad expressed, but there was something else far more sinister in the ad's final warning.

The ad was about health care reform, and it urged all good Americans to call their Congressional Representatives and urge them NOT to seek funding for the proposed programs through levying excise taxes on soda pop and "juice drinks" (you know, those things that have labels that say "contains no actual juice").

First off, heck... it sounds like a pretty good way to get funding to me. But, then again, I don't drink soda pop or "juice drinks." Not ever. I don't smoke, either, but I'd be okay with them adding a "sin tax" (again) to tobacco. I'll even go this far and offer that they could levy a tax on beer and premium whiskey (something that would hit me in the pocketbook, but, heck, I'm a good American. I even have a birth certificate -- somewhere -- to prove it. But I don't have a pocketbook. Or a wallet, for that matter. Where was I, anyway?).

In any event, funding issues aside, the ad ends with a line (I'll paraphrase here) that goes something like: Tell your Congressman that a tax on soda pops is the LAST thing we need.

So, as I often do, I started pondering that particular idiomatic expression -- the last thing we need.

Ever seen a priest give a dying person their last rites?

So, I suppose that under this particular PAC's proposal, a priest would administer last rites and then say, "Oh, by the way, I'm going to tax your Dr. Pepper, bitch. It's the last thing you need. Now die."

The last thing we need.

So, I guess that as these calls come flooding in to members of Congress, they will thoughtfully take pause, retreat to their situation rooms and shuffle around their lists of things we need. I guess some of them will look like this:

3rd to the last TWN: Outbreak of Ebola.

2nd to last TWN: Asteroid the size of the continent of Africa on collision course with Earth.

Next to Last TWN: Zombie Attack.

Sounds good to me. I'm convinced.
Posted by Andrew Smith at 5:44 AM