Okay, so being here in Chicago makes it easy for me to stay up late, but kind of tough dragging myself out of bed at my usual pre-dawn hour.

When I landed at O'Hare yesterday, it was pouring rain. The plane hit some pretty serious turbulence, too. I mean, bad enough that the woman sitting next to me screamed and grabbed my arm. It's really not a pleasant thing to wake up from the unbalanced sleep you get on an airplane to the sounds of someone shrieking, "Sweet Jesus! We're going to die!"

And that was the stewardess.

Anyway, here's a picture of being stuck in traffic in the rain coming into Chicago: 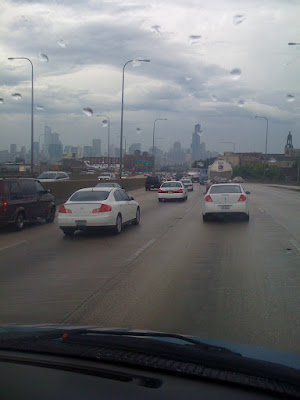 And here's one of Yvonne's book, looking down from my tenth-floor window at Saks Fifth Avenue: 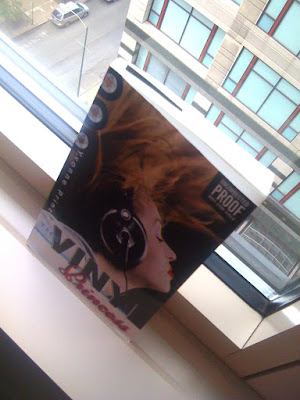 So, last night I attended a very fancy, wonderful dinner with lots of amazing people, whose names shall not be mentioned. And I, like, could totally NOT believe how many of them had read my books. It was awesome... and they thought I actually was someone. That is, until I took out my name badge and they squinted at it and said, "Oh, so you're not Jay Asher?"

And I was talking with my editor (whose name shall also not be mentioned), and the conversation went something like this:

ME: The hotel -- whose name shall not be mentioned because that's where we are having the Blogger's Party and the Tweeter's Jam later tonight -- is really nice.

ME: They even have a runner's map in the room that shows a seven-and-a-half mile running trail up along the lake.

ED: Oh. I must have missed that one.

So I tried to get up early, but didn't get out the door until, like, 7:00 to do that run. By then, it was already pretty hot and humid. But Chicago is quite the runner's town. There were easily thousands of people out running by the lake.

Very nice morning, but a bit rainy at first.

Today, I'm heading over to walk the floor at ALA. I'm going to try wearing my "John Green" name badge and see if people are nice to me.

Later on, the Blogger's Party (I will take pictures), then another nice dinner with people who will not be named, and then the madness of the Tweeter's Ball, 140 seconds of mayhem and questionable behavior.

I'll post another bit later on.
Posted by Andrew Smith at 7:04 AM