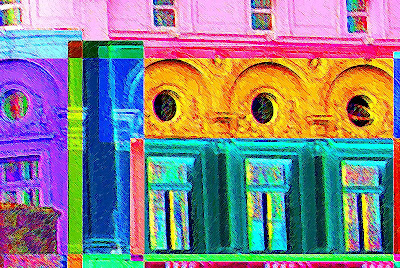 So, the other day I did find myself apologizing to Mike Chamberlain (the actor reading in the path of falling objects for the audio version) about how long and convoluted some of my sentences can be at times.

He said (of course) he didn't mind, and that before he received a copy of the book, he "warmed up" by re-reading Ghost Medicine.

Okay. Well, remember the other day how I'd said "Words on a page are words on a page. They are presented in that medium for a reason." What I mean by that is that I really do consciously LOOK at the words and the sentences -- not just for the content of their meaning -- but for their actual appearance on a page, kind of like they're musical notes that holistically contribute to the "sound" of a book. Again, though, that sound is only playing in the mind of the reader.

In that case, I think Mike was right in "practicing" as he did, because if Ghost Medicine and in the path of falling objects were songs composed by a musician, they'd have a lot of similar musical elements.

But in the path of falling objects has these short, staccato bursts of words that make false borders between some of the longer and more descriptive sentences. Like this passage:

I watched the door close behind them.
And I wondered if my brother would ever come out.
I almost wished they’d both just vanish.
So we sat in the back of the Lincoln in silence for the longest time, me just staring at that peeling green door, trying to find what to say first, afraid that as soon as I said anything, Mitch and Simon would come back out again.
“I’m sorry, Lilly.”

And with that structure-rhythm in mind, when I wrote The Marbury Lens, I'd decided that, if this one were music, it wouldn't even be on the same aisle in the record store. For example:

Sweat.
I’m shaking.
Nickie wipes her hand through the wetness down along my chest and says, "You're trembling again. You're sick."
"You heard him."
"Yes, Jack. I heard him."
"I need to do something. Need you to help me, Nickie."
She rubs the side of my face gently, says, "Jack, I'm scared."
"I'm scared, too, Nickie. Don't let me do anything bad."
"Like what, Jack?"
I can't answer.

So, yeah, I think about stuff like that -- where this would belong in a record store -- when I'm writing.
Posted by Andrew Smith at 5:46 AM