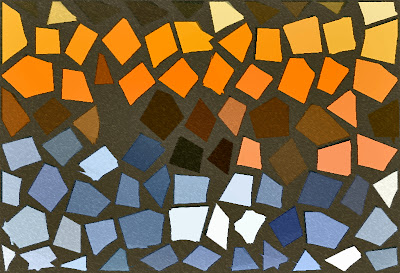 So, yesterday Anne mentioned that April is National Poetry Month.

I've been thinking about posting a poem on April 1, but struggling with how to do that, given the necessary maintenance required by my veneer of insensitivity.

Still, I do tend to take things entirely too seriously.

Anyway, I was thinking about the idea of "brown paper bagging" my short story for kids in high school, and I realized, much to my astonishment, that not once does the word fuck occur in this YA story of mine (but there are some pretty crafty allusions [teachers like that word] to sexuality).

I can't help what characters say. They just do it.

That's why Jack and Conner apply such a liberal strategy when it comes to carpet-bombing the f-word in The Marbury Lens, but some of the characters in that book don't swear at all.

So, I never really thought about this until yesterday's comments on the blog -- that the main character in my shorty (which is a sub-plot to the novel I am finishing in April -- National Poetry Month) has an aversion to swearing, while his co-star cusses with ease (but doesn't use f-bombs).

And, speaking of this not-so-short story, I did a word count on it last night and noticed that it comes in at 17,000 -- when my contract (which refers to me as a woman.. pshaw!) limits my submission to 13,000 words.

Time, I guess, to lap-band an epic and trim it down to a svelte haiku.