all smiling and swollen 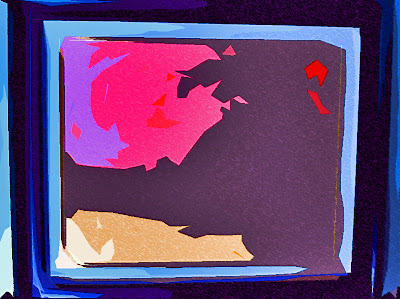 It was a weird day. I caught this really huge and scary centipede, and then I discovered a gigantic bee hive was being constructed right outside the French doors on my office deck (Sorry, bees. You can't live there. Well, let's just say they're not living there anymore. I wonder if bees can turn into zombies.) I should put pictures of the massive centipede and the even more massive hive of dead bees here. (By the way, I did not kill the bees with poison. I hate poison. Never use it, and I have totally organic orchards here. The bees left their earthly existence because I opened up the hive at night and it gets down into the 20s here, even though it is allegedly spring. But we get good cherries.) I had a few nice phone calls from an editor who is in love with a new book of mine, which is nicer than beehives and centipedes; and The Marbury Lens was optioned for film.

But, none of that is what I want to talk about.

Here's what happened, and you'll have to remember that I'm not a mass-follower of anything, which accounts for my Bieber-Friday-Winning-and-Every-Show-That's-Ever-Been-on-TV stupidity.

Someone, obviously trying to be mean -- trying to be a bully (which, I really don't care if people pick on me because nobody picks on me as relentlessly as I do) -- came up to me and said:

Oh... you know, all of your books are on FrostWire. I downloaded all of them...

...and then, the person added:

Well, I don't really care about the "suck" part, because the person who said it is stupid and ugly and has bad teeth. But I was intrigued by this FrostWire thing...

I had no idea what it was.

So I asked some "cool" people.

Getting books off FrostWire, I suppose, is like me coming up to you, ugly dumb person with bad teeth, and saying:

I just made a withdrawal from your checking account...

But I understand the masses think this FrostWire method of getting anything for free is totally okay, since it's easy to be so anonymous on line, and since "everybody else" is doing it, too.

I imagine most of the people who STEAL SHIT via FrostWire would cringe at the prospect of holding up a liquor store or jackin' some fool's car in the 'hood, but they're totally immune to the consideration of ethics when they STEAL SHIT by using their computer.

Which, kind of, relates to exactly what I was getting at yesterday.

All I can say is, to FrostWire and to everyone who's ever illegally downloaded one of my books over the internet:

I hope you get an intestinal blockage and explode because of all the shit you've got where your soul is supposed to be.