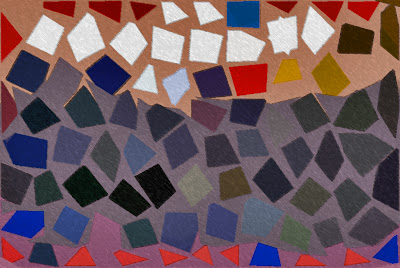 A few days ago, I took some pictures of the typeset and unbound pages from my forthcoming (10.11.11) novel, Stick.

I wanted to show how the format of the type, the spacing of words on the page, were elemental to the story.

Today on the blog, Sara asked: That typesetting is really interesting. Was that something you set out to do from the beginning, or did it develop as you wrote the manuscript?

And, earlier this week, a writer for VOYA magazine who interviewed me was interested in finding out the same thing. Not that I'm trying to "scoop" VOYA on a story they're likely going to run in the June issue (and you'll have to check it out for more details about my novel), but I thought I'd give a little explanation and response to Sara's question here.

The short answer is yes, this was my idea from the very beginning, for a lot of reasons.

First of all, let me backtrack a bit and restate something I spoke about a few weeks ago at the SCIBA Literacy Dinner. I said that the thing I find most compelling about writing fiction with young adult (NOT capitalized) characters is that kids go through life with a kind of detached ambivalence toward the things that happen to them. Whatever they experience, they perceive as being perfectly normal, no matter how horrifying our adult filters may perceive some of the events young people have to endure to actually be. This is probably one reason why adults are frequently more shocked by content issues in (ugh, capitalized) YA than kids are.

Get over it, crusty old fussbudgets.

(I just realized I hate that word.)

In fact, kids have this remarkable ability to see things (even terrible things) with a sense of wonder that we crusty grownups shed when we break out of our larval stage and become rigid and judgmental.

Okay, that's part one of the answer. Hang in there.

The second reason for the typesetting is that the narrator of the story, Stark McClellan, says that, to him, "the world sounds different." Words float around this kid's head, sometimes they get stuck inside him and they can't find a way out. When he's especially anxious, the words seem to be frantically trying to push their way off the page.

But I'm not going to spoil it by showing you any of the really cool pages, because they tell too much.

So, the reason for the "experimental" format of the text served as an attempt to get readers to have to shed some of the filters with which we read and perceive the experiences of others, and to actually "hear" the world in the same way that Stark does.

He promises not to mess with your head too much, though.

I do have to add here, again, without revealing too much about the story and the voice, that I had to really trust and rely on my editor, Liz Szabla, to rein me in a bit with the assault on the readers, which she did brilliantly, as always.

There are tough parts of this book. But, ultimately, and uncharacteristically for me (the excavator of darkness), the book is rimmed with hope and wonder, and there are even a couple of parts that made me laugh out loud (and still do).