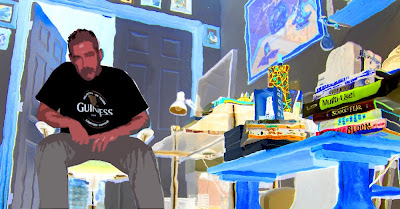 First off, let me tell you how much I admire Lewis Buzbee, both as an author and a friend.

There's this weird, almost unexplainable thing that connects us, too. Except for the fact that he's a Giants fan and I like the Dodgers. [Side note: For some reason, saying that I like the Dodgers inspires more mean comments than saying I like Octavio Paz, or that first drafts are final drafts when I write. *Shrug*]

The same month that my debut novel, Ghost Medicine came out, Lewis's Steinbeck's Ghost came out. So, it was kind of weird that we both had "ghost" novels coming out the same month, and that both of them had strong connections to California.

And this year, we both have novels coming out in the same month again: November. I'll have The Marbury Lens, and Lewis has The Haunting of Charles Dickens.

Okay. Enough backstory. We both received advance copies of our books. Lewis read mine, and I am currently just about finished with his [I plan on writing about the book later in the coming week]. So, I got this very nice email from my friend, and, in it, he said: "When you get around to Dickens, see if you can spot the two serendipities between our two new books. One is big, one is small."

By that, I guess, he meant coincidental connections, or something. But, I have to say that I was totally blown away by these weird -- very weird -- coincidences between our two books. Oh, they have nothing significant to do with the plots, there are just some really creepy, weird similarities -- patterns -- in certain small elements.

Maybe they're only something that writers would notice. I mean, after all, we are both so intimately aware of the words we wrote. But there is something else there, too, and I think it all goes back to this idea of some kind of collective unconscious -- that we were both tapping in to some weird, unspoken message that was out there when we were writing our books. We certainly never talked about them to one another during the process, but these "little things," to me, are really... well... creepy.

And Lewis, there are lots more than two. It's kind of like the Kennedy-Lincoln coincidences between us, except Lewis and I are both alive, and I think that Kennedy and Lincoln were both loyal Dodger fans.

But there is something weird out there, and I'm convinced of it.

All I can say is you should read both books this November, and maybe Lewis and I will conduct some kind of see-how-many-weird-coincidences-you-can-spot contest.

Eh. Who knows? Maybe it's just me. Maybe I am crazy.

And speaking of writers whom I admire, you may want to check out S.A. Bodeen's blog about The Marbury Lens, "Mind the Gap".

I am very flattered, and, thank you.
Posted by Andrew Smith at 3:08 AM