getting back with my people 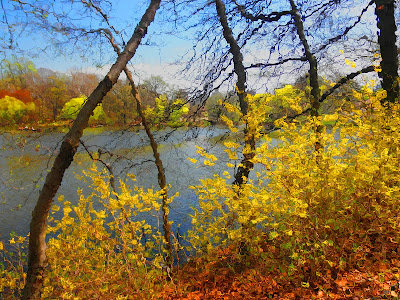 In taking it easy today, I'm going to post something here that I was asked to do for another blog. Unlike *some* writers I know, I'm always willing to hammer out a few quick responses to blog interviewers, without making them *ahem* get back with my people sometime in June because I should have a bit of free time then.

So, here are the four questions I was asked:

1. Did you always want to be an author? If not, at what age did you decide?

I always knew I wanted to be an author -- as far back as elementary school. Before elementary school, I didn't want to "be" anything, which is one of the best things about "being" a kid. I was editor of my high school newspaper, and my very first-ever actual paid job (I was a teen) was as a stringer (that's newspaper language for a valueless reporter) for a local newspaper. In those days, we got paid by the inch of copy, too. It was an embarrassingly low-paying job, but I learned how to stretch out my content and write convoluted run-on sentences just for the sake of an extra buck here and there. But, around this same time, when we had the predictable diner-table discussion about what-do-you-want-to-be-when-you-grow-up, my parents both looked devastated and disappointed when I confessed that I wanted to be a writer, as opposed to, say, an engineer, which was what my dad was -- and not the cool kind who drives trains, the mathematical, slide-ruley kind who does things that I still have no clue about.

I put myself through college, though, and I planned on becoming a journalist. After a couple jobs, though, I realized that being a journalist wasn't really as cool as I thought it would be. So I became a bum and wandered around the world from job to job and place to place. I kept writing stuff, but I had no real plan to do anything with the stuff I wrote, which leads to the next question...

2. Why did you decide to become an author?

When my son was in elementary school, and just beginning to get the future-you pressure that we get in school, he told me that he wanted to be a writer when he grew up. He has always been a terrific reader, anyway. I figured that I did not want to give him the same response that my parents gave me, but I should set an example for him -- if I could. Coincidentally, at around the same time, an old friend from high school, who happens to be a very successful author, contacted me and said something like, "Why haven't you published any books yet?" And I thought, I don't know. So I put together something that I'd been working on -- something I thought my own son would like to read. Then I got an agent, and she sold that manuscript. Just like that. It was the first novel I ever tried to publish. When I took my family out to dinner to celebrate, my son, who was about 11 years old at the time, said, "Thanks, Dad, for being a role model."

I am totally not making that up, too. The kid really said that to me. Now he's 15. I don't know if he still wants to be a writer. I think he does.

3. Would you encourage your children (real or imaginary) to become writers?

If my kids (I have a 12-year-old girl and a 15-year-old boy) want to be writers, I would definitely encourage them to do it, as long as they promised to never use exclamation points in their prose. It's not easy, and "wanting" isn't nearly enough to get you there, but my kids are pretty sharp and I have confidence that they will be better at whatever they want to be than I am.

4. What three adjectives best describe yourself or most writers you know?

What the heck is an "adjective"?

Okay... okay... I'll do the "me" three, because if I described "most writers" I know, I would probably get beaten up:

obsessive, tense, hypersensitive.
Posted by Andrew Smith at 3:12 AM