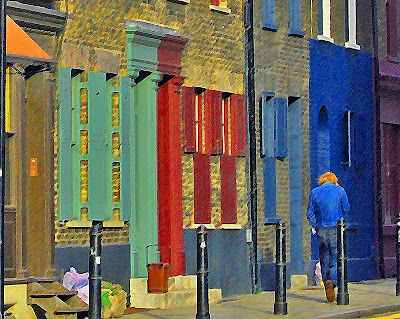 Yesterday's wasn't my first Los Angeles Times Festival of Books, but it was probably the best one I've been to. And it's still going on today, so if you live in SoCal and you're complaining about having nothing to do -- or your kids are -- go there.

One reason why this year's Los Angeles Times Festival of Books was better was that they finally built a special section for YA, thanks to the hard work of author Cecil Castellucci, who also moderated the panel I was on (more on this in a bit). And, judging by the turnout of crowds who came to hear YA authors speak (not an empty seat in the house), the YA section has assured its permanence at the festival.

And maybe from now on, we YA folks will no longer be ghettoized into the Children's area and have to do book signings next to clowns who make giraffes out of balloons. One downer: they did put that talking goat robot who made his debut at BEA a few years ago in Los Angeles near the YA area. All I can say is if I ever saw something like that in my yard in the middle of the night, well... I'd have to shoot it (count: one dead animal in the blog. Well, it's not really an animal, because it was a robot, and a goat. A very, very creepy goat. Who talked. LA Times folk: move that crap next year.)

So the Los Angeles Times Festival of Books folk are finally getting it -- when not a lot of people around the world are -- that YA doesn't fit in at all with "Children's Lit." If you'd heard the selections read from some of the authors' books yesterday, you'd know why.

I mean, not mine... not mine... I just read a creepy part about bugs from The Marbury Lens, but I did take some degree of pleasure looking out through my dark glasses (nobody could tell I was watching them) at the uncomfortable shifting-in-the-seats of more than a few moms and dads who kept their heads fixed straight forward so they wouldn't accidentally make eye contact with their teenage kids during some of the very funny, and, um... kind of embarrassing passages read by Ben Esch (Sophomore Undercover) and Blake Nelson (Destroy All Cars).

And, let me tell you, it was quite a treat to be on a panel with those "guys," and also with Allen Zadoff, who also read a very funny passage from his Food, Girls, and Other Things I Can't Have, that didn't seem to have a similar butt-squirm-rigor-mortis-neck reaction from the parents present.

Which now brings me to my panel discussion. See... I knew this was going to happen. It happens to me every single time I ever show up on a panel and they ask us to read. This time, I had been told ahead of time that we would be asked to read exactly one page. But what happens, see, is other authors start reading their stuff, and it's, like, really funny and awkward and contains boner jokes and stuff (I did make a mental calculation of "boner" references yesterday. I even announced it on stage after the tenth reference... but I digress)... and then I have to go.

Because my books don't contain any of that whimsical boner stuff.

So, at least everyone knew where I was coming from. And I got to read first, so I probably had a significant bum-out effect on the very funny guys who followed my very un-funny reading from The Marbury Lens.

Afterward, the panel had a terrific discussion on writing for boys and boy readership, and how boys are stigmatized by an environment that expects them to not want to read. So, naturally, I had a lot to say on the topic, but you've read it all here before.

And the other guys definitely get it, too. It was a real honor to be on a panel with them, and Cecil asked some terrific questions that, I think, opened more than a few minds in the audience about setting our sights on providing more substance to boys who really do want to read books.
Posted by Andrew Smith at 7:58 AM