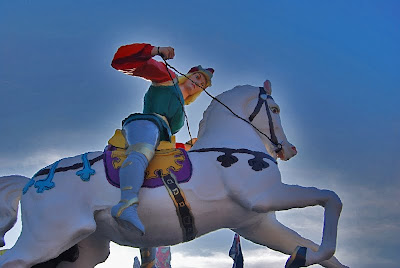 To carry on with a few thoughts Nick (welcome back, and you can straighten out my office today, but just don't lose anything) had about being forced to read something because it was good for him, I think one of the recurring themes I've seen in comments from librarians and teachers who "get it" is choice. We all know that boys are more likely to act out in a negative way when they're uncomfortable, and being uncomfortable because they have no choice in their reading material can really turn boys off to reading.

On the other hand, it's not necessarily fair to presume that boys as a population prefer nonfiction to fiction (I see a lot of librarians who immediately assume they should go get the books on volcanoes or bugs whenever a boy walks into their world). That may be anecdotally correct, but studies show that boys have no higher a level of preference for nonfiction than do girls. The journal The Reading Teacher published a study in November, 2009, that showed the characteristics of books that boys like to read. I've listed them before, but, for a quick run-down: boys like books that look cool (the cover is the first attractor for boys, and it also turns them away from books they might otherwise be engaged in), and they like series books, so they can stick with a particular character for a long time. But there are also some very important environmental considerations regarding the boys-and-reading dilemma.

First of all, it's unfair to label boys -- as a gender -- as being "reluctant." The stigma of doing so is a double edge sword: it communicates to boys that it's okay and within their boyish nature to veer away from reading, and, sadly, it prejudices teachers and librarians when it comes time to making choices about literacy programs and selection of reading materials. I know too many teachers who automatically label boys as bad or difficult readers, just because they're boys.

Among comments I've read on this topic that I find to be interesting and useful are those from teachers and librarians dealing with younger boys (grades 4 and under). As a literacy advocate, I see plenty of evidence that shows that when boys begin to enter the age where gender roles become increasingly important elements of identity, that a prevailing lack of male role-models who actually spend time reading (at home, in school, in the community) can cause an association in the minds of many boys that reading, writing, and Language Arts in general are essentially feminine pursuits. We know that having a positive male role model who reads at home is one of the biggest unifying characteristics of boys who are considered to be avid readers, and the evidence in support of gender-segregated classes shows the attainment of dramatic gains (for all-boy, as well as all-girl classes).

I wouldn't begin to automatically assume what a kid should read simply after sizing up and deciding that boy-equals-Rick Riordan or girl-equals-Laurie Halse Anderson, but I do know that there are specific strategies we can employ to encourage higher literacy in boys as well as girls. I believe most librarians (and sadly, fewer teachers) around the country are doing exactly those things. But, the fact that, as a population, boys' literacy scores have been declining in America in the past 20 years shows those of us in education that some of the things we've bought into have actually inflicted damage to our male students, and it's time to rethink our strategies -- to make them more adaptable to kids, rather than expect kids (and, by this, I mean "boys") to adapt to our preconceived notions of what's good for them.

Now, back to "research" work for me.
Posted by Andrew Smith at 3:34 AM