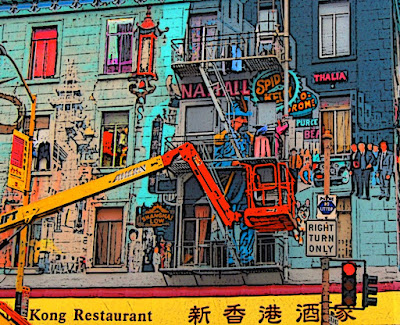 It seems that in the past week or so, I've noticed a number of author blogs that speak on the topic of tense in writing: past or present.

I would imagine there's not too much out there that's written in future tense. That is going to be be pretty annoying (you will eventually think about this statement).

Oh... and a good example of a great novel that 1) kills a LOT of animals, and 2) is written in both past and present tenses: Moby Dick.

I think readers aren't supposed to really notice what tense a novel is written in -- or if the tense is too obtrusive, then maybe there's something wrong. But there does seem to be a trend in recent years, and especially in YA novels, to write in present tense. Again, it doesn't bother me, unless it's clunky, and it is an effective way to create tension and bring the reader into the moment, which is something you generally want to do in YA.

I like to mess around with tense and POV, both as a means of changing the tone of certain passages. I did it in In the Path of Falling Objects, in which the story completely pops around in multiple points of view voiced in differing tenses.

But there are also short little blasts of tense change in The Marbury Lens, too. Sometimes, when Jack gets really scared, when he knows something horrible is about to happen, he pops into present tense. At one point, when he blasts out of this other world called Marbury, just when something terrifying is about to happen and he wants to stay put, he finds himself, for no explainable reason, stranded in the Green Park subway station in London, wet, dressed in someone else's clothing:

The train rushes forward out of the yawning blackness beneath a tunnel arch and hisses to a stop. Doors sigh open with the suction of so many hungry mouths.

I stagger back and fall against the dingy tile wall. The surface is damply warm, feels like every hot breath in the city adheres to it, makes me nauseous.

And then there's the anger part, too. Jack is an angry teenager. But, I think, one of the reasons why he's not annoyingly angry like some YA protagonists turn out to be, is that his anger is not directed outward at humanity in general; most of his anger is turned inward toward himself. In fact, Jack likes people, but he can't get over feeling disappointed and angry with himself, at times, and he blames himself for things that really aren't in his power to change.

When he feels this way, he talks about himself (as the narrator of the book) in third person -- as though he's detaching himself from the Jack who's let him down.

It's fun to play around with tense and POV. And I'm going to stick to my guns and insist that every story has not already been written.

Off to New York today. Blogging from Manhattan for the next few days.
Posted by Andrew Smith at 6:34 AM