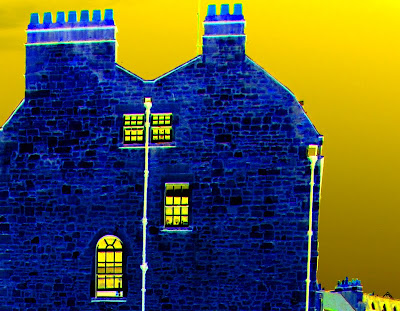 Yes. I am back. I did what the hippies talked me into doing -- got in touch with my seventies self -- and I realized that I didn't like living in the 1970s nearly as much as I like living in the final 32 months before the end of the Mayan calendar.

Mr. Smith said he didn't feel like blogging any more, and, anyway, he's off doing research for something new he's writing, so he asked me if I wouldn't mind posting something today, and I am more than happy to be back as a guest once again at the Smith compound -- what he calls El Rancho de Drew, for whatever reasons.

I was wondering about this research stuff he does. Why do you ever have to research fiction? Isn't it made up, anyway? He keeps telling me no, and quoting that Hemingway saying about it being truer than if it really happened, which, Mr. Smith says, is why he has to leave home so much and get out and watch things.

I mean, I guess I can understand all the reading he does when he writes about stuff like literacy rates and reading trends, but I'm still not sure about the whole researching fiction idea.

I guess you're wondering about my choice for the title of my return to the blog. It's an award the hippies used to give when I was roadtripping with them: the daily churro.

Sometimes, it wasn't actually a churro, but just some random thing that looked like a churro, which, surprisingly, there are lots of things that look like churros, and most of them are completely disgusting and you wouldn't want to eat them, anyway, which is entirely how I feel about churros in the first place.

Well, in all honesty, I've never had a churro. But, then again, I have a very delicate digestive tract. I suppose I could manage to keep one down if it was slightly curried and made with tofu, in which case you'd probably call it a tofurro, and then nobody would ever put something with a name like that in their mouths, anyway.

I've been having a hard time trying to decide who to give the first daily churro award to, because it's a close call for me.

On the one hand, I'm inclined to give it to my mom for making me run away from home in the first place, as a result of her preoccupation with my going to Prom with a girl who I don't even know. I'm convinced that moms who get obsessive over their kids going to Prom have a pessimistic view of the likelihood of their genes being passed along to future generations, which, in my mom's case, would be a haploidal chance in hell, since I was a test tube baby from an "anonymous" sperm donor.

Which brings me to my second contender for the daily churro: the kid (I'm assuming he was a kid) who said that "All of publishing is geared toward girls and women. Because girls and women buy books. It's not just YA." Well, of course, that comment really ticked me off, and I think it's why Mr. Smith told me to come back, and that he didn't feel like blogging any more. One thing I've learned from him being my writing coach is that, he said, "Nick, whenever someone starts a statement with a word like Everyone or All, you know you're dealing with a kid."

To paraphrase: All people who say things like "All of publishing is geared toward girls and women," are kids. Which is funny, because I started that sentence with "all," and I'm a kid.

The hippies would tell me to be giving, and break the churro in half. But I'm not going to do that, especially since I have refuted my "Seventies Self."

Mom, I'm sure there will be another chance at a churro in your future.

The genes, I'm not so sure about.

It's nice to be back.