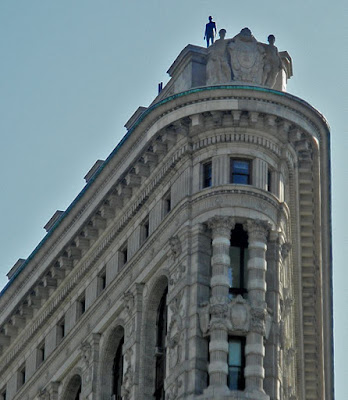 Here's the iron guy they put up on top of the Flatiron Building.

Attention -- All Flatiron Workers: That guy up there shall be named Jack from this moment forward. Don't ask how he got there. He has a hard time explaining how he pops around from place to place.

Yesterday, I got my first real response to The Marbury Lens from a real kid -- someone who won an advance copy of the book. I'm going to quote some of what he said here:

"Simply Amazing. I read the entire thing this last Saturday. I was at my grandparent's house and I actually got in trouble with my mom because, "[I] wasn't being social and was being a recluse on the couch with my book." And as much as I don't want to sound like some fanboy, I actually felt like Jack when I wasn't reading the book. As if I NEEDED to go back to keep reading, just as Jack has his urges to go to Marbury. So I really can't describe it, besides saying it was amazing, and congratulations for writing such an awesomely twisted/entertaining book."

There aren't many people who've gotten advance copies yet, but there does seem to be a common thread in the scattered responses I hear about being sucked away into the book -- which is a very good thing.

But it's a long time from now until November 9, when the book will be released.

I MAY devise some way for giving away an advance copy at the LA Times Festival of Books in two weeks. Maybe (ask around) to someone who shows up dressed like Henry Hewitt.

And, most definitely, there will be advance copies to sign and give away this June at the ALA Annual in Washington DC, where I will be fortunate enough to be speaking and coffee-klatching and signing galleys. We will run out, just like we did last time.

Just so you know.
Posted by Andrew Smith at 6:13 AM