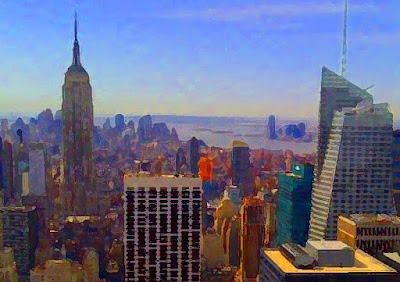 Let me start off by saying how much I love New York City. It is an amazing place. But I also have to admit that I am filled with wonder by more than a few things I noticed there.

First of all, horn-honking. Where I live, people don't use horns. Ever. I don't think I've heard the blast of a car horn up in the mountains in all the years I've lived here. Since I never hear horn-honking where I live, I think the constant sound of it evinced some kind of atavistic run-from-the-giant-flying-lizard stress response in me.

And this kind of goes along with street-crossing. People cross streets with their own style in New York. There is not even a traffic light within 20 miles of my home (this is the truth), but I'm sure there are tens of thousands of them on Manhattan, which isn't even 20 miles long. So, street-crossing, to me, evinced some kind of atavistic here-comes-a-stampeding-herd-of-hungry-velociraptors anxiety in me.

But I marveled at one particular type of street-crosser in New York. I saw this happen several times every day: the guy with the briefcase. Briefcase man waits for no light. He doesn't ever break into a run, either. He just holds his briefcase on the traffic-side of his lower body and stares directly at the speeding, oncoming windshield of a taxi cab. I think his eyes shoot out some kind of invisible beam. Sometimes cars will honk at him, but he never breaks stride and just keeps on walking.

I felt like if I had a briefcase, maybe I could get around town faster.

Okay. Then, down around the Flatiron District, we looked up while walking (or maybe waiting at a traffic light) on 5th Avenue, and we saw a man standing on the top of a building. Just standing there. Then we started to notice there were men standing on the rooftop edges of lots of buildings, just looking down at us. At first, I reasoned that they may have been some kind of guardians for all the briefcase men who walked out in front of speeding cars, but then we found out that it was one of the coolest outdoor art projects ever: dozens of life-size, iron men, who just stood there on the ledges of some of the tallest buildings, watching.

We don't have any life-size iron guys standing on the tops of roofs where I live, either.

There were a couple down on the ground, too, and we took pictures of them (I'll post after I unpack stuff). But I just really liked those rusty iron guys standing around Manhattan's rooftops.

I hope they're still there next time I go to New York.
Posted by Andrew Smith at 6:17 AM