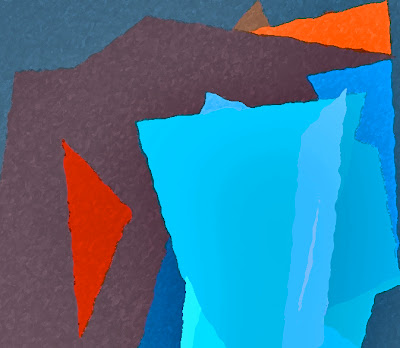 Oh yeah... a dog that had been genetically modified by crossbreeding among wasps and grizzly bears was chewing on my favorite left wrist.

By the way, these posts are for your benefit, for those of you not attending SCBWI-LA. Where are you ever going to hear this shit for free?

It doesn't have to be free. Apparently, some of you are not contributing to the slot:

You want to be invited back next year, don't you? Pay up.

Besides, you've already heard all that tired shit before: Breakout Session 1A: Now That I've Written A Book, What Do I Do Now?

Breakout Session 2A: I'm A Famous Singer. I Was Once A Child. So Now I'll Write A Children's Book And Get A Seven-Figure Advance!!! Squee!!! Writing Is Neat-O!!! Anyone Can Do It!!!

Hang in there. I'm still talking agent and editor advice. We'll do breakout sessions tomorrow or shit like that.

So, yeah... I was thinking about how much I wanted to live. I was also losing blood.

You know what else makes you want to live? Being alone in a room with a wasp.

If God got things right, He would have made wasps the size of grizzly bears and bears the size of wasps. Think how cute that would be.

Awwww.... I want one. If I saw a grizzly bear that was, like, two inches long, I'd catch it and put it in a mayonnaise jar or shit like that.

But a wasp? Fuck that.

I went to a private religious school. In the boys' restroom, they had this urinal that was an entire wall, like fifteen feet across, so boys could just stand there, like twelve of us at a time, and piss on the wall.

The urinal was made by a company in Michigan that was founded by a German immigrant. There is something innately American in that concept: starting your own urinal factory, making a giant urinal so boys could stand shoulder to shoulder and piss on everything in front of them.

The urinal company went out of business. I put a urinal like that in my garage-conversion man cave, so when my friends come over if anyone needs to pee, we can all piss on something together.

My friends stopped coming over.

Anyway, at my school, they had these pictures, right at eye-level above the urinal, so we could see them while we were peeing. By the way, girls should really try to face a wall sometime when they pee. There's cool shit on walls. 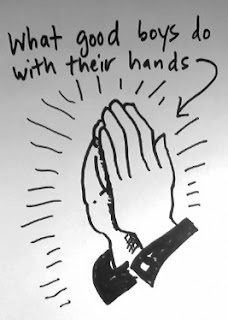 That picture scared us about lots of things.

It also caused some boys to piss on their neighbor's leg.

In it, there was also a quiet hint that if you got caught doing something bad with your hands, they'd end up on the wall above some urinal like a fucking deer head or shit like that.

Tip One [you thought I forgot, didn't you?]: Sure, go ahead... follow an agent or an editor into a urinal. That kind of shit is what makes America great. By the way, you have a tremendous advantage at a writer's conference getting that valuable face-time if you are a guy and are targeting a male agent or editor. We never have to wait in lines. And we get to piss on walls together.

What could be better than that?

I hear James Patterson sold an entire MG series by pissing next to guys.

Which brings me back to this idea: [by the way, I'm not purposely trying to drag out the dog story. Everyone loves dog stories. And it does have a really cool twist at the end, but I might not get to it today. Still, this is worth your time. Trust me. Mine, I'm not so sure about. Did I mention the slot?]

I would WAYYYY rather be standing at a wall-length urinal beside a 6-foot grizzly bear than a 6-foot praying mantis.

Who ever thought making something that looked and operated like a praying mantis wouldn't be a cruel joke to play on everyone? 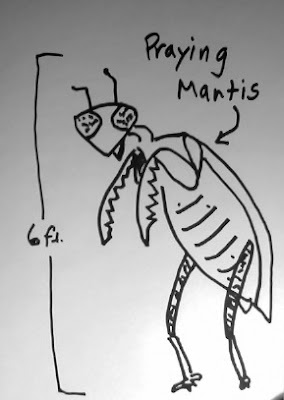 You know what good praying mantises do with their hands? If they're 6-feet tall, they rip your fucking head off with them.

Anyway, I'll have to tell you what happened with the dog, my favorite left hand, and the breakout sessions tomorrow.