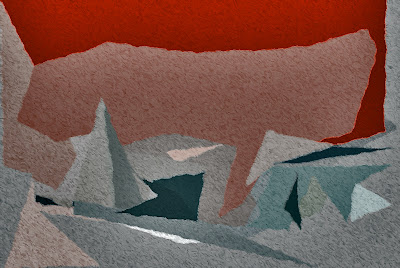 I hope you all find the opportunity to listen.

Last night, distracted as usual, I was lying awake, thinking about what I am going to say. Because I think I'm going to say something that may be shocking to some people.

I'm not going to cuss, though.

Well, unless they ask me to.

Then I'd feel obligated.

One of the benefits of my recent bout of distraction and agitation is that I've been running more. I run every day, anyway, but lately I've been popping off on 12-milers and stuff. I've been intending to bring my cell phone with me (which probably wouldn't be a bad idea anyway, considering how easily I could die and never be found up here) so I might take some pictures of the things I see on my runs.

Yesterday, there was an enormous black rattlesnake just sitting there, throbbing, looking at me from the middle of the trail (The path at that point was pretty narrow -- maybe about 2 feet wide -- so there was no way we were both going to "share the road," since the snake was, I'm guessing, about 3-feet long or so).

Anyway, what do you do when you run right in to a big rattlesnake? I complimented him on his good looks (because he was really cool-looking) and then said, "I'm just going to go past you." And I let him have the trail and I took a relatively narrow detour along the edge of the trail and then kept on my way.

So, anyway, last night I was thinking about this thing -- about how much I am cursed by the Ugly God of YA -- because it was one of those rattlesnake/monsters/saving yourself kinds of days.

In my first novel, Ghost Medicine, the narrator pretty much believes that everything he sees and experiences is some kind of sign that connects him to much bigger things. You should read that book. It's actually pretty good.

So, about that rattlesnake yesterday (and, by the way, I am not making this up): I thought about turning around, which I certainly could have done; and I even thought about killing him, too, which, let's just say wouldn't have been the first time I've killed a rattlesnake. But I just stepped around the thing.

Um... and he could have bitten me if he wanted to.

My naked ankle was definitely in range.