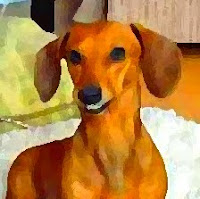 First off, you were right.

Who would ever think a goddamned wiener dog would go viral?

I did this to myself.

And, bro, you better have upgraded your voicemail, because if I get cut off after three minutes I’m deleting you from my contacts.

I’ve fucking had it.

Please tell me you and Stella are coming back from Brian’s wedding today, ‘cause, man, I think I’m losing it.

And if the cops get hold of you, or you saw anything on the news or shit, it’s not as bad as it sounds about Mikey getting lost and being all bloody and only in his underwear and one sock.

You know how your kid is.

And they found him anyway.

This is how it was, ever since you dropped Mikey off on Saturday.

Let me tell you. You know I’m not the best father figure for your kid, but hell, it was him that got Miss Candor to talk and then put that shit up on YouTube.

Gold fucking mine, all because a dachshund has a three-word vocabulary of biscuit, goddamnit, and please.

And I don’t give a shit about all those commenting assholes who say “please” sounds like “penis.”

Why would my dog ever say penis?

If you slow down audio enough, you can make anything sound like penis.

So, anyway, don’t freak out. Mikey’s okay. I’m on my way to the police station to pick him up right now.

Shit, I can’t drive when I’m on the phone.

As soon as you dropped the kid off and left, I’m sitting there, having a beer and calling the driver who’s supposed to pick us up to go to the airport. God, I love flying first class, even if I’m taking Miss Candor and your kid and trying my best not to look like some creepy child molester because how can a 22-year-old guy who only needs to shave, like, once a week, have a kid who’s nine?

So, I’m on the phone with the limo people and he’s, like, “Want to see my loose tooth?”

Benny – why do I not remember acting like that when I was nine?

Why do I not remember my teeth falling out?

You know how repulsive that shit looks?

No, of course you don’t know, because your only kid decided it was time to jettison his first-ever tooth at the age of nine in my goddamned house the night before we were supposed to fly first fucking class to be on nationwide TV with my talking wiener dog.

Who does not say penis.

Get the fuck out of the way.

“No. It’s disgusting. Get away from me.”

“Look at my loose tooth.”

I shit you not, Benny.

That is my night, right there: I am stuck here inside the innermost ring of hell, which is ruled over by your kid, Mikey.

Can you believe it?

When do I scream? Never.

But Mikey pushes the thing out with his tongue, and his goddamned tooth is, like, pointing at my eye.

Did I ever do that?

It was like the worst thing I ever seen in my life.

“My tooth is loose.”

“Go see if you can find a gun, then come back and shoot me in the forehead.”

I try to be responsible.

I try not to drink so much when I have to watch Mikey.

So then Miss Candor’s agent calls, just to make sure everything’s set for the trip. She says all this blurry number shit. I don’t know what she’s talking about, ever, but I’m afraid of seeming dumb. So I just nod and say “uh huh” like I’m taking voice cues from whether or not the number shit sounds like a happy shitty number or a sad shitty number.

That’s all she talks about. She could care less about me.

She’s a goddamned wiener dog, not some heroin-addicted underwear model, for Christ’s sake.

You can guess the next part.

Mikey’s filming the dog. You know how he teases her with a Milano cookie and squeezes her intestines to get her to talk?

I hate those fucking camera things.

Did I tell you I’m borrowing your Audi?

I tell my agent I have to call her back and I go in there where the kid’s playing with the video equipment and Miss Candor.

Mikey looks like Hannibal fucking Lecter after a binge meal.

He’s got blood all down the front of his face, all over his T-shirt, and he’s holding this little bloody thing in his fingers.

I almost threw up.

There was some skin stuck to it.

I’m like, shit, I can’t deal with this right now. I don’t know what to do with a tooth.

What do you do with a goddamned tooth?

I mean, like, I know what to do with a tooth, but what I really want is to just throw the thing in the garbage.

Tell me the truth: you let that kid drink coffee, don’t you?

I’ve seen his eyes get all glazed over like a crack fiend in Pacoima when we drive past Starbucks, Benny.

Don’t lie and pretend you don’t know what I’m talking about.

Then he says he wants a Baggie to put it in.

“I don’t have any Baggies, Mikey.”

But I can’t stand looking at the thing, and your kid is just sitting there, covered in blood, in my media room which now looks like a fucking mosh pit for hemophiliacs.

So I tell him to take his sock off and stick the thing inside.

And, while I’m not paying attention, Miss Candor’s eating the whole goddamned bag of Milanos. Even the paper.

So I get the cookies away from her and Mikey starts whining about how he has to go home and put the tooth under his pillow. He says you and Stella told him that’s what you need to do with bloody teeth.

But it takes me an hour to get the kid calmed down enough to go to bed.

I’m, like, “Mikey, you just put it under your pillow here. It will be fine. The Tooth Fairy will find you here.”

And he’s, like, “The Tooth Fairy knows no kids live here, Uncle Evan.”

Which, I admit, was a big mistake for me to say to him, because the kid insists on wearing his bloody shirt in bed.

Long story short – the reason he was in his underwear when they found him is because I set his pants on fire in the dry cycle of the dishwasher.

Get out of the way, you douche.

Sorry. Slow asshole in the canyon.

Well, his pants were not, like totally on fire. But pretty fucking charcoaly.

I don’t do laundry.

And the kid was going to bed, anyway. I just didn’t want him to be all bloody on the plane.

So, Mikey’s in bed, Miss Candor’s looking a little stoned out off pure Pepperidge Fucking Chronic Farm, and I’m thinking, great… now I have to take care of the whole Tooth Fairy lie or I will destroy my nephew’s childhood.

I don’t know what a Tooth Fairy is supposed to leave these days.

No. Of course not, because your son lost his first goddamned tooth in my house.

Have you ever looked that shit up on Google?

But I got no small cash. Hello! We’re supposed to be getting picked up to fly to New York in the morning. Why would I be carrying small bills? And, sorry, but I’m not giving the kid a hundred for bleeding all over himself.

So I want you to know it’s your fault, Benny.

I did this for you.

I did this for Mikey.

I was gone for, what, maybe five minutes. Twenty tops.

And, later, when I go into the spare room to slip a fiver under his pillow, that’s when I see Mikey’s gone.

So, I swear to you, that’s the truth about what happened.

Why don’t you pick up your goddamned calls?

Okay, well, to be honest, I didn’t go into his room until the limo driver showed up, and by then it was too late to deal with this shit.

The driver was waiting.

We were going to miss our flight.

I freaked the shit out and called the cops.

I mean, he had to be at home, right? I figured the cops would pop over, pick him up, no problem.

But it doesn’t work that way when you’ve got local TV news reports coming in about a bloody kid wandering around after midnight in nothing but his underwear and one sock.

Have you ever been to the police station?

I have never been to the police station.

Why does the parking lot look so fucking creepy?

Seriously, it looks like somewhere Stalinist thugs would take you and stick an ice pick in your throat or something.

And why do cops think it’s okay to have mustaches and no beard? Having only a mustache and no beard is like shaving only one armpit.

So when the cops show up, I guess it didn’t help anything that Mikey’s blood is all over the floor and I have a burned pair of little kid pants cooling off in my kitchen sink.

That can all be explained, I say.

Then officer mustache says hey, aren’t you that guy with the wiener dog who says shit?

So I’m like, whew, a fan. Maybe I’m not going to get arrested for child murder after all.

And I say, yeah, and then he’s, like, he takes out his cell phone so he can film it and says, “Let me see Miss Candor talk! I want her to say ‘penis.’”

“She doesn’t say ‘penis.’” I say, “And Mikey’s the only one who knows how to squeeze her intestines to make her talk, and he’s not here because you’re not looking for him.”

But, I’m a good sport, right? What if Mikey doesn’t show in time, I’m thinking. What if it’s just me and Miss Candor on Letterman tonight? So I grab the sack of Milanos and get Miss Candor.

So, yeah, that’s when everything got impossibly bad, Benny.

Like I said, she wasn’t looking too good, and when I squeezed her, the only thing that came out of her was a little turd.

The cop starts laughing, saying how he’s going to YouTube it. And I’m, like, fumbling around for one of my agent’s cards and trying to tell him how that shit’s copyrighted and shit.

Right there in my goddamned hands.

My life is over.

What am I supposed to tell Letterman?

Oh… Miss Candor regrets she will be unable to appear…

I’m going inside to pick up Mikey.

And why don’t you answer your goddamned phone?

Miss Candor’s agent is on the other line.

I’ll have to call you back.