may the best horse... #TheBet 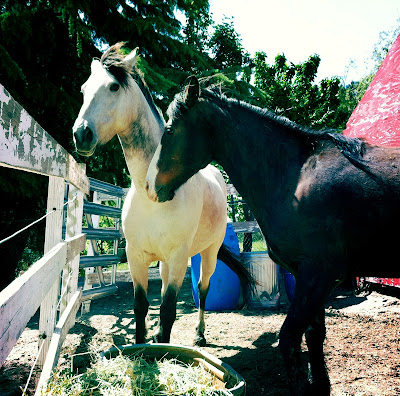 I promised I would do this.

It's intended only to inflict some psychological stress on Catherine Ryan Hyde, Brian Farrey, and Kimberly Pauley in preparation for tomorrow's bet on the Kentucky Derby.

So I went out in my backyard and took a couple pictures of my horses yesterday afternoon, just because it's all springtimey in California. I usually don't like to take pictures of them when they're eating because they can be so uncooperative.

Well... they are, anyway. But they perked up when I told them about the bet.

The white one (she's a silver buckskin) is named Dusty, and the moose-faced mare on the right is named Arrow. They're grounded because Dusty just broke three of my wife's ribs.

Dusty feels bad, but not bad enough to lose her appetite.

I hung a photo of Pants on Fire in her stall. Also, a photo of Justin Bieber.

I can't tell which she prefers.

Also, tomorrow is the Awards Presentation for Mrs. Nelson's Young Writers Competition. I have a stake in that, too, since my son, Trevin, won first place overall, and another of my Writer's Group kids -- Kaija -- won honorable mention.

So we're all going down there for the festivities.

It really is a cool competition, and this year Mrs. Nelson's received entries from all over the country. The winner kids actually get published in a book, and they get cool prizes from one of the coolest indie booksellers in Southern California. 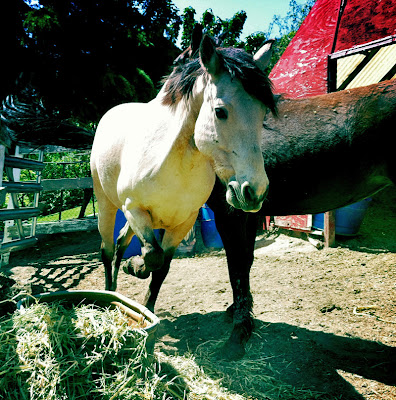