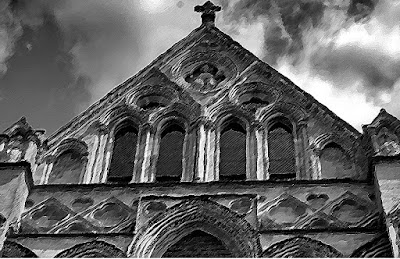 I read this piece in the New York Times where they posed a question to a number of YA novelists and other thinker-types, asking for their theories behind the recent popularity in dystopian fiction for young adult readers.

So, I'm going to pretend the New York Times asked me, which in my fantasy-pretend-universe will allow me to exceed the apparently miserly word-count they limited their respondents to. I'm also going to pretend to be obtuse, snobby, and evasive in my response, as well.

Heck. It's my pretend-iverse, after all.

Don't you love them?

Trends are terrific and useful things for people whose impulse to sell vastly overshadows their creative capacities. (See? I told you I'd be snobby. Now for the obtuse and evasive bits...)

The truth is that dystopian fiction (and, by that, I imagine we're talking about works which establish a kind of nightmare-world that is generally believable) has been around forever. As long as novels (and even epic poetry) have been written. There's nothing new about dystopian literature at all, and certainly nothing new about its popularity among readers.

So go away with your stupid hipster, scenester questions, dumb New York Times.

The thing that concerns me is that the moment people start talking (in all caps) about TRENDS or A SCENE, then there's all this polluted kind of acceptance about necessary ingredients that identify a work as part of this great new giant TREND or SCENE. Then things start to get watered down, neutered, and just not very interesting.

And the door is suddenly open for an awful lot of not-too-clever poseurs who latch on to their coveted list of magical and necessary ingredients and proclaim themselves to be "in the scene."

(Warning: Extreme snobbiness is about to ensue. Stop reading now if you are sensitive.)

I know it's just me. I know I am weak and shallow. I am a bad person. But I want to punch everyone in the world in the face who says something like, "Oh! I am currently writing a Steampunk novel!"

Then let the hipster, trend-identifier police tell you if you're in the club or not.

I am hip to that scene.