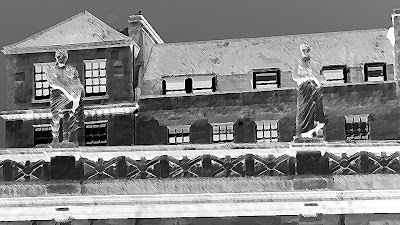 Things that make me want to punch people in the face:

Yesterday, I had a very pleasant email conversation with one of the brightest people I know, Dave Barrett, managing editor at Macmillan. Dave's emails have a particularly soothing effect on me, because he doesn't even use the shift key at all.

One of the things I like about Dave, aside from his soothingly lower-cased emails (and I don't think I've ever seen the guy employ one of those eye-stabbing grammatical blights which would require a shift-key plus one combination of effort) is that, like me, he is a distance runner.

People give me crap for this (which is one of the attractions to living in a sparsely-populated region. Well, that, and it's easy to hide bodies), but I have not missed a single day of running in what is now about to be eleven years. I run in heat, wind, snow, wildfires, and, today, a horrendous storm.

I am about to leave on my usual Saturday-morning five-mile loop through the hills. I don't bundle up particularly well during weather like this, either. I mean, what's the point?

There's almost nobody here to tell me it's stupid.

Lots of people told me I was stupid when I didn't take time off from running when I had a broken foot. It was deliciously painful. And yes, I did it.

Sometimes writers need to experience new dimensions of pain, especially if we ever want to tell stories about things that hurt.

Like certain punctuation marks, and people who use caps lock on their email responses because, I suppose, they think you're not paying attention, or smart enough, or something like that.