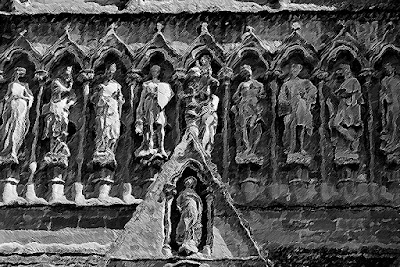 I had planned on taking the day off, leaving little more than the message that I would return soon with ample stuff to say, but I needed to provide a chilling follow-up to yesterday's spider drama.

So, this morning, Jew that I am, I was sitting by the fire, coffee in hand, while my wife and children were cooing over the vast assortment of expensive gifts I foisted off on them [it always goes this way], and, as expected, they gave me the one Dad-marked package.

Naturally, I don't even have to say what's in it. Underwear. Of course.

Oh. And a spider. Not just any spider, but the evil twin of the one who passed away in bed with me on solstice night.

No, Anne, there will be no photographs. No spider nor underwear pictures. Because this one only lasted about three seconds on the couch beside me before being wadded up in cast-off underwear wrappings and deposited in our roaring, Jewish, Christmas morning fire.

There's more than a little bit of me in all the protagonists of my novels. Like Troy Stotts, the constantly questioning kid in Ghost Medicine, I'm always seeing the non-coincidental connections in things, the ripples that weave the strings of one day to those preceding and following it.

This is my week for exceedingly large, quick-on-their-feet spiders who want to cozy up next to me.