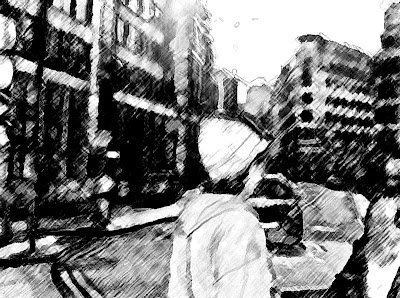 Ha! Deadlines are to me as dolphins are to tuna nets.

Do they still do those questions on SATs?

Lack of sleep, like chain-smoking, will catch up to you.

And when it hits, it will kill you.

But, anyway, about this taking-my-son-to-see-Roger-Waters-perform-The-Wall thing...

In the last few weeks, my son (who is sixteen years old and getting ready to go off to college) and I have had some deep and life-changing (hopefully) conversations. Which reminds me that I need to write a post about our "coffee talk"; how coffee relates to women, and life, in general.

Hold me to that.

The coffee talk presents a fundamental view of the universe which my father never had the chance to share with me, but I have gifted to my son.

Just doing my duty to the species.

And it probably will only offend about half the population, so as guy-to-guy talks go, it's probably entirely genteel.

So, anyway. Back to the Wall concert experience.

Here's the deal: we quickly realized that there were, like, no sixteen-year-old kids at this concert. Okay, okay... by "no kids," I mean they were outnumbered, easily, about 300-1 by people from my generation.

Which isn't really so bad, I guess.

My people are old.

Look around you, son. Here we are at The Wall.

This is where the handoff occurs.

My generation to yours.

This is what you see, son. We are the guardians of the world, the stewards of everything we have left behind to you, and this is us:

We are old. Really old.

Look, son, many of us need assistance walking. And those who do use assistance for their ambulation have a hard time grasping their walkers with one hand without spilling their bong water on their hush puppies.

Yeah, son. Look around you. We are the ones in charge: old people who smoke pot.

Lots and lots of pot.

And I'm, like, son, let me apologize right now to everyone in your generation for this -- what you see, and what I just realized is our legacy to you.

My people are a bunch of really old people who can barely move, but we can smoke a shitload of pot and bring down the Western world's economy by refinancing our mortgages.

Yes, son, that old lady there with the oxygen bottle and little air mask is smoking a fatty joint.

Yeah, son, we're in charge of the world.

Some of us are so fat we can't fit in our Roger Waters $200 seats. We have to stand up (with assistance) and use our seat for a shelf for our bongs.

This is the world, son.

Like dozens, maybe hundreds of people present frying on acid or 'shrooms, son, I've just had a Pink-Floyd-induced epiphany:

This explains a lot, doesn't it?

No need to thank me for the world, son. Consider it my gift to you and all your little friends.

Oh. And it doesn't come with a gift receipt. There are no returns at the "World" store.

Don't kid yourself, son. It's not the Ninth Ring of Hell: a bunch of old people who can't move, smoking pot at a Floyd gig.

Oh, and the ones who can move either have to get up out of their seats and block your view every thirty goddamned seconds because they need to pee again, or they fall down a lot. It's a combination of all the booze plus the Nacho cheese sauce on the floor, which makes it really slippery.

And who eats wheelbarrow-sized portions of Nachos at a concert, son?

My people do, that's who eats Nachos.