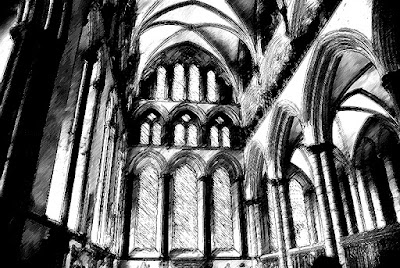 As a writer (oh... doesn't that sound exceedingly snobby?), I don't believe there are such things as "bad words."

To be honest, if you've read this blog (and certainly if you've read my most recently published book), you likely have noticed that I pretty much use just about every "bad word" in the lexicon of profanity.

Except for one or two that I just don't like.

In a follow-up to yesterday's post, I thought I'd compile a list of nine words/terms that I do not like much at all. In fact, I hate them. I would have made a rounded "ten" with the addition of the word crossover, which, to me, means a really ugly car or something that would be naturally selected out of the gene pool in the next breeding frenzy, but I decided to sit on the fence about that word for the time being.

Also... yeah... I caught a lot of grief for making fun of Steampunks yesterday. Um... so what can I do? Eh.

Anyway, here they are, in two sections:

PART ONE -- WORDS THAT ARE MADE UP:

DYSTOPIAN (This is a made-up, trendy word. Like "fajita," which is also a word I hate.)

FAJITA (Do you even have fajitas on the East Coast, or, like Machiattos, do they only exist in California?)

MACCHIATO (I know. This really isn't a made-up word, but I still hate it. This foul blasphemization of coffee is actually Italian, for "Douchebag," which happens to be one of my favorite words.)

PART TWO -- WORDS THAT ARE NOT MADE UP:

EDGY (This word is meaningless and criminally overused. Please do not call yourself edgy. Ever.)

FAERIE ("Fairy" is okay. Just not "Faerie." Ewww... I want to punch myself in the face just for having typed it.)

ANY NAMES OF PEOPLE OR PLACES THAT SOUND ICELANDIC BUT WERE MADE UP BY FANTASY WRITERS FROM THE MIDWEST ('Nuff said.)

SCROTUM (I have blogged about this word before. Nobody should ever use it, no matter how genteel or anatomically precise you're trying to be. The word should be abolished, to be replaced by the much more lyrical "Ballsack.")

Now, and this shall be the winter break writing assignment for my young writers' group: go write a story that uses all of the above.