the madness of edward bellamy 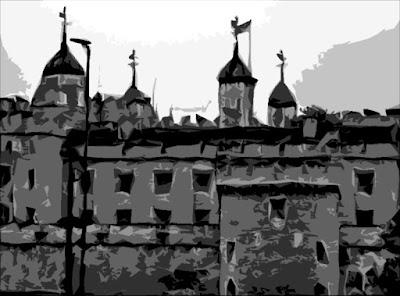 Okay. So, back when I was an undergraduate, I skipped around from major to major, accumulating enough unused units to do... um... nothing. But I was thinking this morning (by the way, the Creepy Smoking Guy appeared in the dark just precisely as I stepped out of my messy bedroom and into my horrendously messy writing office) about a novel I read, back in the old disorganized (maybe there's a pattern here) undergrad days that had been written in the 1880s.

I am aware that people who study American history have a general disdain for the shallowness and material preoccupations of our peeps during that era, but, for some reason I feel emotionally attached to it -- like maybe I'm reincarnated from that time.

[Side note, again: My Punjabi friend, who does not read this blog -- which justifiably evokes the thought of why I would mention this -- would be proud of me for having performed a puja for Lakshmi yesterday. I was having a really shitty day. We'll see if it pays off. Oh yeah... I was talking about reincarnation. That's why.]

So, anyway, I've even written an historical novel (don't worry, you'll never have to read it) that takes place in California during the 1880s [Make note, apostrophe bitches: it is 1880s -- plural -- NOT 1880's -- possessive. Just having inserted that apostrophe makes me gag.], for which I did a vast amount of most enjoyable research. Yeah, whatever.

But it's also why I inserted Seth's Story within The Marbury Lens.

Where the hell was I?

So, yeah... I read this novel called Looking Backward, by Edward Bellamy, in which the main character (a dude named Julian, from the 1880s) gets hypnotized and wakes up in America in the year 2000. So it was kind of like Bellamy's prediction of what the US would be like... like, now.

Anyway, I still have that book sitting right here in my office, which makes me think of a lot of things I'd really like to say, but you know me... I am always so obtuse, apolitical, and vague... I never name names... and, despite the frequency with which I routinely piss people off, I always -- believe it or not -- go out of my way to try to avoid it.

But Edward Bellamy, since you're either dead or hypnotized, let me just say two things:

2. I don't know why I brought you up in the first place.

Because I had planned to do the nauseating (sorry about that word, story queen) "Looking Back at 2010" blog post today.

And so I will:

January - In January, while the downstairs of my house was being torn apart by remodelers who took a fucking week longer than they were supposed to take, I went to Arizona with a group of Los Angeles-area authors who ditched me in a part of Phoenix where I nearly lost my life, the cab driver I finally found got lost, and cost me $75 to get back to my hotel. Yeah. Phoenix. Squee! (I can't even describe how much I hate that word, too)

February - Like I will this coming February, in Feb. of 10, I attended the SCIBA Children's Literacy Dinner. Always one of the best book things of the year.

March - In March, I did several high school visits. The best one was at Newbury Park High School in California. The kids were so smart, and I got to sit in on a block-scheduled creative writing class with some really cool and talented kids.

April - Visited my editor and publisher (and Dave Barrett, Ksenia, Rich, and everyone else at the Flatiron) in New York City. Amazing time. And I spoke at the LA Times Festival of Books.

May - We rented a place at the beach for my daughter's birthday.

June - In June, I spoke at ALA in Washington D.C. I also met Ralph Eubanks there (what an honor) and got to hang a bit with Barry Lyga and P.J. Hoover. I also saw Ellen Hopkins' legs. And a whole bunch of other cool stuff.

July - In July, I went to Banff, Canada, for my birthday.

August - Nothing good ever happens in August. Sorry, it's true. Ask anyone.

September - And someone will have to refresh my memory about anything that happened in September. I can't remember that page on the calendar.

October - In October, I spoke at a SCIBA Authors event. I drew cartoons. It was really cool. Ask anyone who saw it.

November - Lots of stuff: I received the Children's Lit Council Award for In the Path of Falling Objects, The Marbury Lens was released, I had a great launch party at Mrs. Nelson's and flew up to San Francisco to have dinner with my editor and Lewis Buzbee and do another launch/reading/party thing there.

December - In December, The Marbury Lens went into its second printing, I was attacked by spiders, I was attacked by the city of San Diego, I got to speak at Mysterious Galaxy's Holiday Book Party, and the Creepy Smoking Guy started showing up every morning outside my window in the dark.