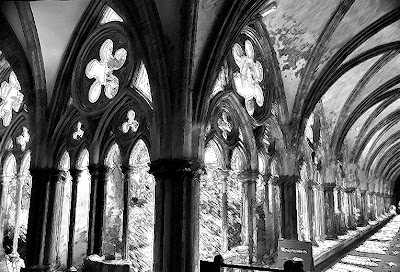 Those of you who do not read this, will.

I have written in the past (getting the scoop on all the other, lame bloggers this week) about resolutions and my general disregard for them.

I will tell you a true New Year's Resolution (hereafter, NYR) story, though, starring the great big giant ME.

Sometime in the last decade of the previous century (I can't remember the exact year), I actually made -- and kept -- a NYR. The resolution was to start eating meat. Previously, I had given it up, and the thought of returning to the unrestrained depravity of atavistic carnivorous gratification sickened me.

But being a vegetarian is hard work for a man, for it requires monumental devotion. So I figured the easiest way to get myself off the hook was to just make a NYR to start eating meat. And I did.

At first, I will admit, it was really gross and disgusting. Seriously. Like smoking cigarettes, which is why I sometimes consider making the "start smoking promise" my next NYR. But I got used to it.

So, if anyone ever says they don't know anyone who's ever succeeded at a NYR, point them to this blog.

And they will either read it or they won't.

And now I will continue to ramble:

Yesterday, I was thinking about how many people I know (I don't know very many people at all) who've said things like Oh... writing a book must be really hard [Side Note: I wonder why it is that every time I paraphrase what the great big giant EVERYONE remarks to the great big giant ME, I always make "them" sound dumb? Oh... wait... I almost forgot: it's because I'm an ass.]

Writing a book isn't that hard.

You know what is really hard?

Writing your second book. And then -- good God! -- your fourth or fifth.

It isn't like childbirth, which, I'm told, gets easier and easier -- so that by the time your cranking out your "Lords a'Leaping" round of squealers, they're pretty much shooting out like there's a potato cannon down there or something [completely offensive remark to all women, for which I am totally disgusted in myself].

No. Writing books gets harder and harder.

I've written a lot of them.

And then there was another thing... well, to be honest, a couple of them, that I wanted to ramble on about today in a completely disjointed way, but I'm sitting here -- it is 5:00 A.M. -- and I can see the "Creepy Smoking Guy" sitting, alone, up in the hills behind my house, in the absolute dark, just watching me through the big windows on my office.

Yes, as well as historically successfully fulfilling a NYR, I also have a "Creepy Smoking Guy" that materializes out of the darkness from time to time.

When I don't see him, it's because he isn't there yet.