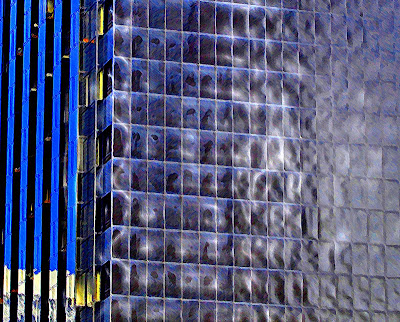 I am completely stuck.

Mr. Smith makes it sound so easy, but I am totally jammed and everything I try to write sounds completely boring and pointless.

I guess this is what people call Writer's Block, but Mr. Smith insists that it doesn't exist. He should be inside my empty head, then he'd change his mind.

And I know that, technically, my mom told me I couldn't go up there, especially after what happened to her Volvo, but we still have a perfectly good Infinity, so I drove up to the mountains yesterday to try to track Mr. Smith down, even though I knew I shouldn't be bothering him while he is unwriting. But I couldn't think of any possible way to solve my problem.

And even driving up there in the daytime, like, totally creeps me out. Where Mr. Smith lives is kind of like a more paranoid version of where those kids got killed in Blair Witch Project. I even took out my 3GS iPhone and filmed a closeup of my face as I drove Mom's G37 on the mountain road, saying "I'm so scared," but then I wasn't paying attention to the curves and almost hit a homeless guy. Well, he might have been homeless, or he might have been one of the Druids from last week. Everyone who lives up where Mr. Smith does looks homeless, anyway.

When I got to his house, it was all quiet, but I had a feeling Mr. Smith was there. So I let myself in through his gate and walked around the back of his property. His horses lined up at their fence. They looked like they wanted to eat me; blow more snot on me at the very least. But I was not about to get close to them. Sweater. Cashmere blend. Not going to happen.

It turned out Mr. Smith was unwriting by reading, sitting in a sauna house below his home. I found this out when he cracked open the door and said I was lucky it was daytime because he almost shot me.

I wondered if it was safe to keep firearms inside a sauna.

I sat outside, though, and talked to him through the door while clouds of steam leaked out around it.

Mr. Smith said that sitting in a sauna is a good way to clear your head and think about what you're writing. He said it was almost hallucinogenic, which is why the Native Americans built sweat lodges, only they knew how to do it without actually murdering people.

But I wasn't about to get in any sauna. I have unusually small pores, and if I sweat it makes me faint.

So, while he sat in there, Mr. Smith gave me some of his ideas about Writer's Block, and what I could do if I was suffering from this "imaginary affliction."

And I'm going to write about those ideas on my next post.