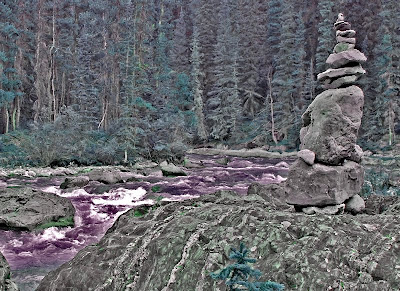 One of the things I hear most frequently from readers is a comment that goes something like this: It's really hard to figure out if you're telling the truth or not.

I never specifically answer that comment beyond shrugging and saying something like, "All you have to go on are the words."

So I've been meaning to write for a while on the reliability of narrators, and, maybe a little bit about why I prefer fiction to nonfiction, both as a reader and a writer. Here goes.

I've turned in six (six!) completed novels to my editor since she first received Ghost Medicine, in, I think, 2005 (maybe 2006 -- I'm not good with dates), and every one has some element of the memoir to it. That is to say that every book I write always contains some real stories from my own life.

I even 'fess up to that in the acknowledgments of in the path of falling objects. But I am not the least bit interested in writing a memoir for a lot of reasons, the top of the list being that I simply don't want to tell everything about myself and the people I have known.

Okay. So along come my next two novels, both of which are told by narrators who will raise some suspicions, I think. In a little over a month, we'll be seeing advance reader copies of The Marbury Lens, a huge departure for me in the way the novel blends in elements of Science Fiction, Fantasy, and Horror, overlapping a contemporary story arc rooted in the here and now. The thing about this book is that its narrator, Jack Whitmore, is what we would call "unreliable," but since he's the one telling the story, you're going to have to come to some conclusions on your own (All you have to go on are the words). Because there is a distinct possibility that Jack is insane -- damaged by events in his past -- and that none of the things he "sees" are actually real.

I have every confidence readers will figure it out, though.

I will warn you, too, this is not your 8th-grade teacher's oh-I've-found-this-charming-young-adult-novel-about-a-teen-who-falls-in-love-with-a-ballerina-over-summer-vacation book. You'll see why.

And, next down the road, I have Winger, a funny and dark story about fitting in and the consequences of being an outcast. This one, also, has an unreliable narrator in fourteen-year-old Ryan Dean West, who has an excessively expansive imagination and sees hidden supernatural elements in most of life's occurrences. Again, since he's the one in charge of telling the story, all you can do is take his word for it that these things are actually evident. Not as challenging a task as figuring out Jack from The Marbury Lens, because Ryan Dean West frequently backtracks his story and admits when he's just making things up. In any event, though, Ryan Dean leaves enough "wiggle room" in his story to make you think that maybe there is actually something supernatural propelling the events he is witness to.

So, I like making people wonder about things like this, making them work for the truth when all they have to go on are the words of the narrative. And I will talk more about reliability, the truth, and finding it in fiction in upcoming posts.
Posted by Andrew Smith at 6:29 AM