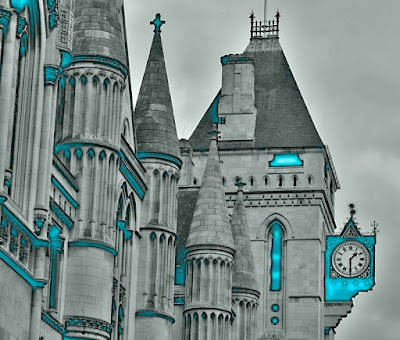 4:15 AM -- Mr. Smith wrote constantly from the moment we were settled in his office. He had a peculiar method of writing, though. He flipped back-and-forth between projects: he would write a few paragraphs on his novel, then read a few pages from his galley, switch over to blogging, and sometimes he would look up maps or images or read newspaper stories on the internet.

Sometimes he would stop and put on one of his sock puppets (he has a box full of them) and take a picture of it with his computer's built-in camera. He also laughed, at times, for no apparent reason.

I was most surprised that he didn't curse. He told me that he never swore. Only in his writing. Swearing made him feel uncomfortable.

But he wasn't uncomfortable in his manner of dress. I should have mentioned, too, that from the first moment I saw him, at the Druid ritual with a gun and cup of coffee, that Mr. Smith was not wearing any pants. He was dressed only in a T-shirt, glow-in-the-dark boxer shorts with skulls on them, and socks (not even shoes).

So he clarified to me that the only jobs worth having don't have dress codes.

Anyway, he told me that 4:15 was time to put on pants and go outside, and that this was part of being a writer.

4:45 AM -- I was not prepared to be expected to feed Mr. Smith's three horses. I am afraid of animals, and I was wearing my nicest shoes. One of the horses sneezed on me or something. I couldn't tell because it was too dark and I thought I would throw up if I saw horse snot on my favorite Express shirt.

Mr. Smith told me that punctuating your writing routine with outdoor activities was essential, and then he said, "I hope you don't mind a couple-mile jog down by the lake."

He explained that was part of writing, too.

5:15 AM -- There are no streetlights at all where Mr. Smith lives. The only way I got my bearings was from the glowing embers that still smoldered from the Druid sacrifice. So, in trying to keep up with Mr. Smith, I fell down twice and ripped the knee of my trousers. I started to cry, but it was too dark for Mr. Smith to see it.

6:00 AM -- We made it back to Mr. Smith's office. I was sweaty, my eyes were puffy, my pants were torn and dirty, and I had horse snot down my left sleeve.

Mr. Smith sat back down at his desk and continued working on two or three things at once. Sometimes, he would check his email. He rarely read any of them, he just machine-gunned through his inbox by hitting the delete key.

Then he said, "Where are my manners? I'd bet you'd like some breakfast, huh, Nick?"

He said, "I'll be right back," and he went downstairs.

When he came back up he brought me a large cup of black coffee.

That's what writers have for breakfast.

By the time I had shadowed Mr. Smith for three hours, I realized that writing is physically strenuous, black coffee makes my stomach feel agitated, and that if you're going to be a writer, you should limit your wardrobe.
Posted by Andrew Smith at 5:42 AM