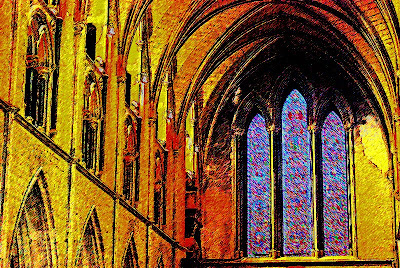 3:00 -- Mr. Smith told me that I had to arrive at his home at 3:00 AM if I wanted to observe him at work. He said that was the time his work day began, and it would be when I'd see him at his most productive state.

This meant I had to leave my house just after midnight, because Mr. Smith lives in such a remote part of the mountains, and the only way I'd be able to find his place was with the GPS on my mom's Volvo.

Luckily, I described my car to Mr. Smith, because the GPS wasn't entirely accurate and it mistook the address he'd given me for a vacant lot at the edge of the lake he lives on, where a group of people who were apparently completely naked were burning something really big and running around in circles chanting in a language I was unfamiliar with.

Mr. Smith came down when he saw my Volvo pass his house. He was carrying a cup of coffee and a rather large, black, semiautomatic handgun.

Later, he explained that all writers who were worth anything always worked with coffee in one hand and a gun in the other.

I wondered how he wrote.

He said, "Don't mind the Druids, Nick. That's normal for up here. You should see the really crazy people."

He escorted me up to his house.

3:30 -- Mr. Smith gave me some coffee, but he wouldn't let me put any milk or sugar in it. He said that would creep him out too much, and I respectfully declined the whiskey he offered to "flavor it up."

We went upstairs to his office. I took some pictures of the office (Mr. Smith refused to allow me to photograph him), which I will submit with my complete report. Photographs are the only way to capture the environment in which Mr. Smith works. There are too many unrelated objects for the human eye to entirely observe. Among them: a human skeleton, four sharpened samurai swords, several bottles of whiskey and tequila (these are actually sitting on his desk, along with stacks of manuscripts, books, and audio CDs), a Wonder Woman action figure, a stick pony, statues of the Hindu deity Ganesha, radio controlled helicopters, four guitars, a mandolin... you get the idea.

When Smith sat down to work at his desk, he realized there was no other seat in his rather large office. The sofa was completely taken over by cardboard boxes full of books and manuscript pages. He cleared some away so I could sit down.

He had his computer running. He explained that he was simultaneously working on a new novel and proofreading the typeset galley pages of a novel to be released this year.

I was interested in the pages. Mr. Smith threw them down on the floor of his office. "I've thought about killing myself several times over these pages," Mr. Smith said. "This typesetting... gah!"

I looked at the pages.

I didn't know what he was talking about.

In my first hour of shadowing Mr. Smith, I learned that being a novelist requires patience and an even disposition.
Posted by Andrew Smith at 6:33 AM