Okay. Let me tell you how much I hate YA.

I'm letting all the big reasons out today, so hang on.

First, a little backstory. I was e-talking with Lia Keyes the other day, and she mentioned to me about another author who thought that YA as a category should be done away with. She thought it would be interesting -- fiery -- to have me participate in this debate.

Here are my three biggest reasons:

1. YA has no definition. You may just as well call it "fiction." And, because of this ill-defined super-categorization of what I believe to be a non-existent genre, people carry too many pre-conceived expectations about constraints on content and embedded curriculum (see point 2).

The thing is -- and why YA is a pointless label -- is that YA contains every genre of the broader category of fiction, from contemporary literary, to science fiction, paranormal romance, chick-lit, fantasy, humor, and so on. But the YA section in a bookstore is the vampire section.

It's kind of like putting all adult fiction in the "Dan Brown" section. Remember, "YA" didn't exist when Twain wrote The Adventures of Huckleberry Finn, or even when Harper Lee wrote To Kill a Mockingbird. I don't think there was such a category when Stephen King wrote Carrie or 'Salem's Lot, both of which would definitely be stamped with the big Y and A if they were published for the first time today.

All those titles up there (and I'm sure you could think of many others) were just novels.

Let's revisit the Venn Diagram from two days ago: 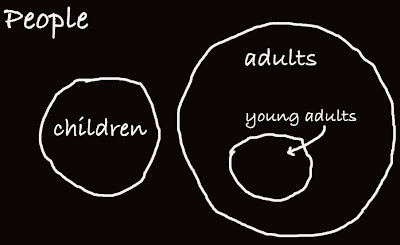 2. The Expectation and the Blues. (That's the title of a really great song from Corb Lund)

(The Blues)... best "back-at-ya" comment I received from someone on the "Part 1" installment:

"As a writer you can write for any age group you want, can’t you?

If you hated being a teenager why write for and about an age that made you unhappy?"

Okay. Now, I am definitely NOT speaking on behalf of all authors here, so don't give me any superpowers I don't already possess.

First, question one: I don't write for an age group. Not ever. Nope. Totally wrong assumption. I write to tell a story. The only target in my mind is a story, NOT a demographic.

So, the expectation part: See, when people pre-suppose a work of fiction is only for a particular age group (and that age group happens to be... let's say, high school kids), then they frequently get all caught up in the thought that what you write must contain some kind of curriculum geared toward the elevation or the insulation of the fragile "young adult" soul.

It's pretty much what I've been railing against for two days now. And for those people who want to put the cart up front of the horse, and pre-plan a target demographic and constraints on content, that's all totally fine with me.

Do you hear me? It's fine with me.

Just don't expect me to do it.

I just write stories. If people want to get all caught up in the debate about a writer's lack of responsibility for including certain content elements, then they can't possibly be talking about books for "adults," whether they're young, old, or anything else.

My readers are adults. Young ones and old ones. It's a disservice, in my opinion, to treat them like children.

3. Back to Taxonomy: (And I know this will likely tick off a lot of my author friends, so, for that, let me apologize in advance)

Take a look at the Venn Diagram above, one more time. Now, where it says "People," imagine the word "Literature."

One of the things I've struggled with most -- and, given that I've NEVER set out to aim anything I've written at a particular demographic sector -- is that everywhere you go, YA literature and YA writers are constrained within the "Children's Literature" circle.

How can this be? How can you be a writer for "adults," and produce work that has the big Y and the equally big A on it and also, simultaneously, be considered a county within the kingdom of KidLit?

It makes me crazy. I don't have any answer for it, either.

But it's a big reason why I hate YA.

If you don't get this, don't try. Don't get all bent out of shape thinking I don't LOVE reading great books by writers I totally admire, love, and respect -- who also happen to be burdened with the evil brand of YA.

We wear it proudly. But I hate it.
Posted by Andrew Smith at 5:32 AM