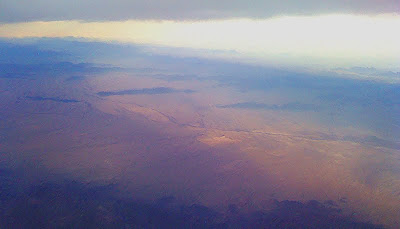 Yesterday, we talked about getting started on things.

Mr. Smith said that's one of the ways schools makes you hate writing. That's especially true for boys, he said, because boys need to make their own choices in most things or they'll fight you.

For the boys who were stuck, Mr. Smith told us to just think about something very general -- an atmosphere, a mood, or even a memory that was really vivid -- that we may want to tell a story about. Then he read us some opening sentences that he thought were particularly good, and he said to us: "What kinds of questions come into your mind about the rest of this story? How do you think this story will play out?"

He even read us the first sentences of his next book, The Marbury Lens, and asked us to tell him the rest of the story -- from just these two sentences:

I guess in the old days, in other places, boys like me usually ended up twisting and kicking in the empty air beneath gallows. It’s no wonder I became a monster, too.

We all had guesses, and he thought they were terrific stories, but they were all wrong, too.

So Mr. Smith told us to spend some time thinking about that atmosphere thing and then let an opening sentence or two come to us. Then he said that he would ask us questions that he'd like us to answer if he was a reader.

This is the way that writing evolves, he said, and it's the way that the writer grows. He said the big difference between school writing and what he calls "real writing" is that when you're in school, there is no growth in the writer or the work -- you do it, hand it in, get a grade, and move on. But in "real writing," the writer, his work, and his coach all work together and things change and grow along the way.

It's kind of a weird concept for me to grasp after eleven years of school writing, but I'm going to let it happen and see what I can get from it.

At least I feel like giving it a shot.