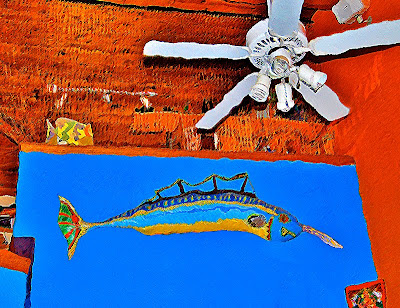 Yesterday, Mr. Smith told us about what happens to him when he has to revise something he's written. He said everyone who writes will revise their work, and that we'd even still want to revise it, even after it's too late.

Mr. Smith said that a lot of writers beat themselves (or anyone they can get their hands on) up when it comes to revising, but that he really likes that part of the work. Maybe he was just trying to make us feel good about ourselves, even though I've known him for a few weeks now and he doesn't seem like the kind of person who would ever say something untrue just to make you feel good.

And, anyway, I was feeling kind of down because after the things he told us on the first couple days, there were already kids submitting stuff to him to look over -- kids who didn't think they'd be able to write anything at all, but said that after the way Mr. Smith told us how to approach the beginning of a story, they just couldn't stop themselves from writing.

So Mr. Smith told us about this psychologist named Elisabeth Kubler-Ross, who has this five-step process for coming to terms with death. Mr. Smith said that getting a revision letter from your editor is kind of like dealing with death: you can always count on it coming, but knowing that doesn't make it any easier. Kubler-Ross's five steps of dealing with death are Denial, Anger, Bargaining, Depression, and Acceptance.

Mr. Smith wrote a paper for other writers about the "Five Steps of Revising," but he said he'd have to tone it down for us, because he used swear words in it for grown-ups, and you know how Mr. Smith feels about swear words.

So, I wrote down what he listed as his Five Steps of Revising, even though, like I said, he talks really fast and he scatters his thoughts all over the place before finding his way back to the point. But here's what I got:

Skimming is the first thing that happens when a writer receives revision comments. Mr. Smith says that, at first, we'll refuse to sit down and actually read the entirety of the comments and questions, because we're going to convince ourselves ahead of time that he's going to say "this is perfect. You are a god." Mr. Smith said skimming is a form of denial.

Stage Two: "Somebody is stupid, and it isn't me"

Mr. Smith said stage 2 happens when we actually read what is written to us. It's the same as Kubler-Ross's "Anger," because we'll probably think he just doesn't "get it" and he's totally stupid. Mr. Smith said he doesn't mind if we think bad thoughts about him at this point, and that a lot of writers give up at stage 2, but he knew we wouldn't because he already told us this was normal and we'd get through it.

Side note about Mr. Smith: I don't think he ever gets mad about anything.

Mr. Smith said that it's normal for writers to try postponing their deadlines, and that he knows some pretty ridiculous ways writers have pulled off getting extensions in the past. But, he swore that he had never in his life run up to a deadline, and that there was no way for us to get around his deadlines for us. This makes me nervous, because he wants something from me by next Friday, the 5th of February. Anyway, Mr. Smith said, this is the same as the "Bargaining" stage in Kubler-Ross's model.

Yes, this stage is the same as stage 4 in accepting death. Mr. Smith said that when we finally get down to work on our revisions, it's going to be because we realize that the thing isn't going to write itself and we promised ourselves that we would work through this process with him. Then, he said, once we start working, we will usually get stuck on the first sentence for hours or days, and keep flipping through the back pages, wondering how we will ever be able to put it all together.

Mr. Smith told us it all boils down to this: at stage 5, we will realize that we have done something far better than we could have done in isolation, and if we keep in mind that this is the reward at the end, it will make it easier for us to get through the first four, painful, steps in the process.

After that, because it was Friday, Mr. Smith dismissed us so he could say swear words in private.