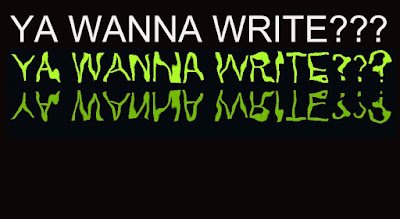 There's a lot to do with writing at work. To begin with, when you go out in the world looking for your first job, you're going to have to fill out an application. No big deal, right? But there's something there that most kids don't realize: writing is your face.

Your prospective employer is going to take that stack of job apps and make two piles: one where the applicants could write, and fill in the information requested, and the "other" pile.

Which pile contains the application of the kid who gets the job?

In this day and age, writing is your face -- more than ever before. You do so much communication with people via writing on the internet, social networking sites, email, texting, and much of the time, the person on the receiving end has no idea who you are as a person, what you look like, what your attitude is. So they have to size you up based on your writing. A lot of times, their conclusions about you are going to be wrong, kid, but whose fault is that?

As much as you may stamp your foot and stubbornly resist the idea, there is NO JOB in the world where the guy who can write well isn't going to have an advantage over the guy who can't.

So, work at writing, and when you do work, make your writing be your face.

When I was in college, and shortly after, I had a couple of gigs as a writer. I wrote for a small newspaper, and, after that, spent a few years writing for a radio station. These jobs really forced me to sharpen up on the technical aspects of writing, and there was no way you could hold onto these jobs if you couldn't write.

Growing up, I always wanted to be a writer, but these first jobs woke me up to some pretty harsh realities that I didn't foresee in my romanticized dreams. They were boring. Sure, I was being a writer, and I can still remember how exciting it was the first time my name appeared on a byline on the AP Wire from a (very local) story I'd been covering about toxic waste.

It was all good practice, but it still wasn't the kind of writing I wanted to do, so I was unhappy. But I got pretty good at hammering clean copy out. And then, the day of my "big break" came at the radio station.

It was Christmas Eve (honestly), a long, long time ago.

Of course none of the "important" people in radio want to work on Christmas Day, so the "Big Boss" asked me if I wanted to do the morning shift. Live. On Air. Just me.

Well, just me and the creepy engineer guy who made sure nobody got electrocuted and that you could hear our station on the other side of the freakin' planet. But it was my "big break, kid," and I was like, yeah... cool.

Okay, well, I went home that afternoon, and I was kind of planning out in my mind the things I was going to do on the great big ME show, and the phone rang. It was one of my best friends. This, quite honestly, was how the conversation went (oh... keep in mind that I was very young and very single at the time):

Then I called up the "Big Boss" and quit the radio station.

And I went on a road trip that started on Christmas with my buddy, a Jew. And I swore to myself that one of these days, I'm going to write about this in a novel...

Which, kind of, brings me up to the fourth bullet.
Posted by Andrew Smith at 2:45 AM