Maybe you thought I'd forgotten about my online How To Be a Writer Conference.

I did not forget.

Here is Breakout Session 2: The Proposal.

First, remember, nothing is free.

So, the other day I was talking about writing books and shit like that with some of the guys. Yeah. There were actually guys who write gathered together at Mrs. Nelson's on Sunday. If you missed it, that's why you're here, paying me.

I was chatting with my friend Allen Zadoff. Allen is a great guy to talk to. He is funny and he knows a lot of shit about writing, which is a definite plus considering he's a guy, and everyone knows guys don't know anything about writing and women's hairstyles.

So I was telling Allen how I just write books. That's it. I write them. Nobody knows about them. I just do it. My fourth book, Stick, just came out. And I have another book coming out next year. It is called Passenger. It is the sequel to The Marbury Lens. I have already written that book, too. I am currently pouting about it, though. I will tell you some other time.

I also have a book coming out in Spring of 2013, shortly after Passenger. That book is being published by Simon and Schuster, and it is called Winger. I have already written that book, too. And in 2014, Simon and Schuster will also publish my novel called Once There Were Birds.

Guess what? I finished writing that book too.

Um. And I just finished writing another book. Nobody knows anything about it (except for my son, who has read it, and one other person). So, I'll tell you. It is a very long book. It is a completely insane science fiction, and it has a deliriously happy ending. That book is finished, too.

So I was saying to Allen: I can't understand how most writers sell books, or even multiple books, on proposal to publishers before they are even written.

That would scare me into illiteracy, I think.

I do not believe stories come OUT of me. I am pretty sure they come THROUGH me.

So I could never be boxed-in by the constraints of a prefab great idea, even if it was specifically about this and that, and shit like that.

On the other hand, there is cash and cash to be made selling great ideas, I am told.

This is how you do it: You walk into an editor's office (it would be nice to have an agent with a briefcase and an iPad with you), and you hand the editor a slip of paper with your proposal on it. 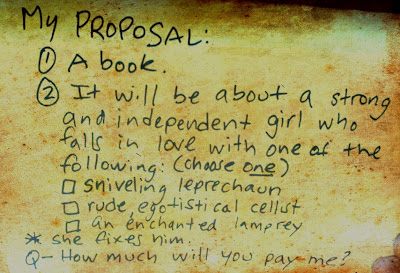 If you do not know, an enchanted lamprey looks like this: 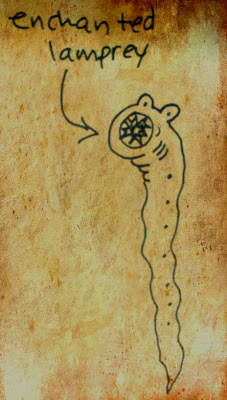 You can tell it is a lamprey, because it does not have a briefcase or an iPad, and has a circular mouth with rows and rows of needle-sharp teeth.

I hope you learned something today in my online How To Be a Writer Conference.